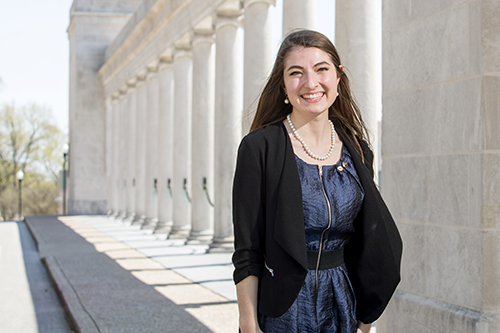 Loandria “Andi” Dahmer, a WKU junior from Fisherville, has been selected as a 2018 Harry S. Truman Scholar.  She will receive $30,000 for graduate school and opportunities for professional development to prepare her for a career in public service leadership.

“This achievement is a culmination of the support I have received from so many on my journey,” Dahmer said. “I am forever grateful to my family, my friends, the WKU community, the Office of Scholar Development, and my thesis advisor, Dr. Timothy Rich, for always believing in me. As Isaac Newton stated, ‘if I have seen further, it is by standing on the shoulders of giants.’”

WKU had at least one finalist each year since 2012, but Dahmer is the first student from WKU to earn this honor.  Candidates for the Truman Scholarship go through a rigorous, multi-stage selection process. In 2018, 756 candidates were nominated by 311 colleges and universities nationwide.  From the 194 finalists, 59 scholars were selected.  Dahmer will receive her award in a ceremony at the Harry S. Truman Presidential Library and Museum on May 27.

“What a wonderful affirmation, not only of Andi’s scholarship, talent and public service mindset, but of the possibilities available to WKU students,” WKU President Timothy C. Caboni said. “We are so proud of Andi and the leadership she has provided, and we know she will represent WKU well as the first Hilltopper Truman Scholar.”

The daughter of Ann Coffey and Steve Dahmer, Dahmer is majoring in Economics, International Affairs, Spanish and Asian Religions & Cultures. A student of both Mandarin Chinese and Spanish, she has studied abroad in seven countries while at WKU. Dahmer is writing a thesis on the diplomatic recognition of Taiwan as it relates to Central America and has co-published three articles related to East Asian studies with her mentor, Dr. Rich. She is also a student in the Mahurin Honors College at WKU.

Dahmer currently serves as WKU Student Body President and Student Regent, leadership roles that grew out of her deep involvement in the Student Government Association. Beyond her work for equity and inclusion through campus leadership, she works to engage students in the political process through advocacy with the ONE Campaign, membership in the Hilltopper Organization of Latin American Students, and her leadership in the campus Committee for Diversity and Inclusion. She aspires to a career in Kentucky politics working to mitigate inequality in the Commonwealth.

Dr. Rich, associate professor of Political Science at WKU, said she has been his student on four occasions since 2016.

“Not only has she been an exceptional student and researcher, but one of the most intellectually inquisitive and genuine students I have ever known,” he said.

While completing her application, Dahmer sought the guidance of Dr. Audra Jennings, director of the Office of Scholar Development and WKU’s faculty representative for the Truman Scholarship.

“Working with Andi has been an honor for OSD,” Dr. Jennings said. “I have no doubt that she will make a tremendous difference in the world. In her, I see the promise of a better future for my home state of Kentucky.”