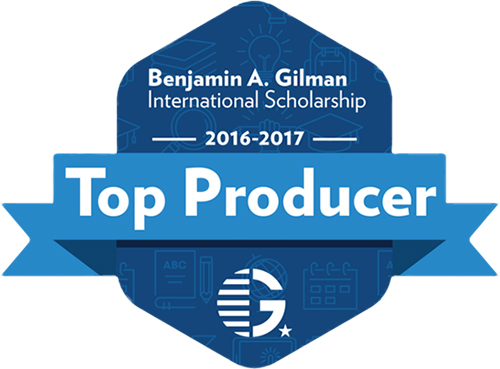 WKU has been named a 2016-17 top producer of Benjamin A. Gilman International Scholarships by the U.S. Department of State’s Bureau of Education and Cultural Affairs. WKU is tied for 26th among more than 100 institutions nationwide with more than 15,000 undergraduates. This is the first time Gilman top-producing institutions have been recognized.

WKU was also named to Gilman “Priority Achievements” lists for institutions with the most diversity in overseas destinations and for sending abroad the most first-generation college students, racial or ethnic minority students, and students studying in STEM fields.

Cory Dodds, the coordinator of nationally competitive opportunities in the Office of Scholar Development, works closely with students applying for the Gilman Scholarship. “The Gilman Scholarship makes transformative study abroad experiences possible,” he said. “It has been rewarding working with our applicants and seeing them grow, personally and professionally, as a result of their study abroad experiences.”