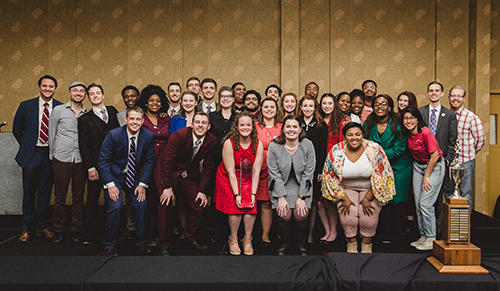 WKU sent 21 competitors with a total of 66 entries to the national tournament. Of the 66 total entries, 31 advanced to quarterfinal rounds, 21 advanced to the semifinal round and 15 events made it to the final rounds of competition. Last year, the team fielded 38 quarterfinalists, 21 semifinalists and 10 finalists.

“We are all so proud of our team’s performance this weekend,” said WKU Director of Forensics Ganer Newman. “We were trailing three teams as we entered quarterfinal rounds on Sunday afternoon. The students remained focused, committed to their messages, and supportive of one another. Their effort produced the best quarters-to-finals conversion rate of any of the top four programs at the tournament.”

Newman said the team’s success at the tournament was the result of a season-long effort. “Our program is comprised of hard working individuals from all walks of life, dedicated to a shared vision,” he said. “Our team members spend countless hours developing their speeches, travelling to competitions and responding to critical feedback. After every tournament, we go back to the drawing board all over again. This process can be exhausting, but it also empowers our students. By the end of the season, you know your ideas have been tested and validated. It was great to see the process yield such an outstanding result for our university.”

Ambam’s individual victory is also a point of pride for the team as a whole, Newman said. “We are a family bound by a shared sense of purpose and pride in our university. Everyone on the team knows how hard Andrea works to perfect her speeches so it was truly inspiring seeing the team cheer her on as she received a standing ovation for her efforts,” he said. “It is such a difficult award to win Andrea is only the fourth individual champion from WKU, and the last time a WKU student was named the best overall competitor in the country was in 2014. Her accomplishments are the result of a collective pursuit of excellence.”