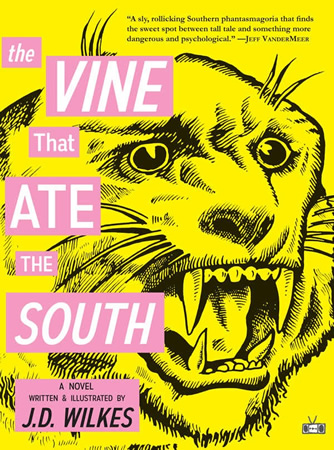 J.D. Wilkes, Grammy-nominated front man and founder of the Legendary Shack Shakers, will be reading from and discussing his book The Vine That Ate the South at 7:00pm on April 19 at Barnes & Noble Booksellers as part of WKU Libraries’ Kentucky Live Series. The book, published by Two Dollar Radio, was hailed as “…a relentlessly fun novel, the literary equivalent of a country-punk album that grabs you and refuses to let go…it’s undeniably one of the smartest, most original Southern Gothic novels to come along in years,” by NPR.

“It is a remarkably fun piece of literature that’s nearly impossible to put down,” said Sara Volpi, Literary Outreach Coordinator for WKU Libraries and SOKY Book Fest organizer. “After meeting J.D. at a Lost River Sessions in November, it was fascinating to see how his energy can come across on the page just as dynamically as when he is performing his music.”

Wilkes, who also illustrated the book, has just released a solo album and is touring extensively this spring. A resident of Paducah, Wilkes is a harmonica and banjo aficionado whose interest in music also prompted him to write Barn Dances and Jamborees Across Kentucky (The History Press, 2013).

This event, co-sponsored by the Southern Kentucky Book Fest, is the final event in this year’s Kentucky Live program, a WKU Libraries’ lecture series where speakers talk about the best of Kentucky. Copies of Wilkes’ books and music will be for sale at his reading on April 19, and his discussion will be followed by a Q&A session. The event is free and open to the public and is swipeable for WKU students. Wilkes will also sign books and participate in a panel discussion (11:00am) at the Knicely Conference Center as a part of SOKY Book Fest on Saturday, April 21.