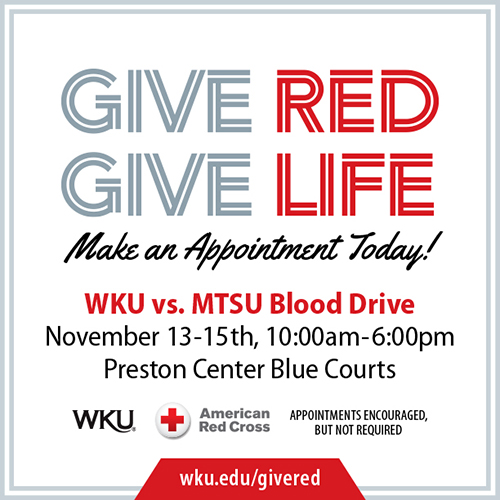 WKU and the surrounding communities can now schedule an appointment to give blood during the WKU vs. MTSU Blood Drive competition on November 13-15, 2017 from 10:00am-6:00pm at the WKU Preston Center.

The blood drive provides a competitive way in which supporters can donate blood during the week leading up to the Western Kentucky University vs. Middle Tennessee State University football game. The university that receives the most blood donations for the American Red Cross will be recognized at the game at WKU on Friday, November 18. WKU won the competition last year.

WKU continues to focus the blood drive under the motto, Give Red, Give Life in an effort to help the American Red Cross save more lives throughout its service area.

“I give because you never know when you or someone you know will need it,” said Hannah Lindsey, WKU senior from Bowling Green. Lindsey is one of 463 registered individuals who donated to the WKU vs. MTSU blood drive last year.

The blood drive dates back to 2010, and the WKU planning committee acknowledges the efforts of Kathryn Steward’s role in coordinating the WKU drive over the years. Before passed away from cancer in 2017, Steward was quoted last fall sharing why the blood drive was important to her. “I have always donated when I can, even when I was unsure of how it worked, and I now realize more than ever that any of us at any time could be in need of blood. I’m eternally grateful to my donor and am here today because someone took time out of their day to Give Red!”

Anyone interested in donating blood can visit www.wku.edu/givered to make an appointment and find details about parking on those days. The university has reserved parking for community members traveling to campus to donate. While donors are encouraged making an appointment, walk-in donations are also accepted during November 13-15.

For more information about the WKU vs. MTSU Blood Drive, contact Laura Johnson, WKU Student Activities Coordinator, at laura.johnson@wku.edu or 270-745-5795.