3 selected for 2018 class of Kentucky Teacher Hall of Fame 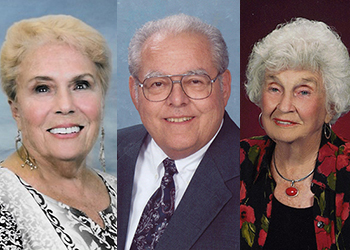 Members of the 2018 class of the Kentucky Teacher Hall of Fame are (from left) Gloria K. Compton, Ronald Montgomery and Mattie Jo Smith.

Members of the 10th class of the Governor Louie B. Nunn Kentucky Teacher Hall of Fame have been selected.

The three chosen by the statewide selection committee are Gloria K. Compton, Ronald Montgomery and Mattie Jo Smith. Members of the 2018 Kentucky Teacher Hall of Fame will be inducted during a ceremony on Feb. 6 in Frankfort. The induction ceremony will begin at 1 p.m. EST in the Capitol Rotunda.

The Kentucky Teacher Hall of Fame was established in 2000 through a generous gift from former governor, Louie B. Nunn. With his gift, Gov. Nunn hoped to recognize Kentuckians who have made significant contributions to the teaching profession. Selection is made from individuals, living or deceased, who have spent a significant portion of their professional career in Kentucky and have made noteworthy contributions to the lives of children and youth in the Commonwealth, ultimately leading to positive impacts throughout the state’s economy. WKU was selected as the home of the Kentucky Teacher Hall of Fame because of its more than 100-year history in teacher education.

Gloria Compton, a native of Barbourville, earned her Bachelor of Arts degree in Health and Physical Education from the University of Kentucky in 1961.

Compton spent 30 years (1962-1992) teaching health and physical education at Bryan Station Senior High School (now Bryan Station High School) in Lexington. During her tenure, she served as department chair for 17 years and athletic director. Jon Akers commented: “She used her caring personality plus ‘homespun’ humor to make her classroom inviting for all students…regardless of their personality, background, or changing mood.”

Compton served as BSSH cheerleading coach (1962-80) during which the varsity cheerleading team won two Sweet 16 championships (1972 and 1974). She started both the gymnastics and girls track and field programs at Bryan Station in 1962, and coached both until 1974.

Compton was the co-founder of Kentucky Girls Sports Association and the Bryan Station Alumni Association. She served as the Kentucky Association of Pep Organizations Sponsors (KAPOS) president, vice president, regional chairperson (17 years) and advisory board member for more than 30 years.

She is a past winner of the National Federation of High School (NFHS) Spirit Award and was the 2004 recipient of the University of Kentucky College of Education’s Teacher Who Made a Difference Award. Additionally, Compton is a 2008 Dawahares Kentucky High School Athletic Association (KHSAA) Hall of Fame inductee.

Former student Jack L. “Goose” Givens said: “She always had a smile and a word of encouragement to offer all of her students, and on many days we would not have been able to make it without her being in our lives.”

Montgomery attended Western Kentucky University (B.A., Social Studies, 1966) and Spalding University where he earned an M.A. in Education (1975) and his Rank 1 in Administration (1976) and Supervision (1979).

Many former students and colleagues admired Montgomery for his innovative approach to teaching communication skills using WTJM, a school television network run by students. Under his supervision, students researched daily international, national, and local news, and presented it to the student body in a daily television broadcast.

Many of Montgomery’s former students have successful careers in videography, directing, producing, telemedia and communications to name a few; and, they credit much of their success to him.

Marty Vowels, a former colleague, stated: “He believed in each student’s ability to improve his/her skills and knowledge,” and “...he trusted his students to use what he taught them.”

Former student Doan Hoang said: “He taught us values, work ethic, and dedication, especially by example. He truly loved what he did and I saw him give each of us his attention, understanding and respecting our individuality and strengths.”

Montgomery was recognized by the Governor’s Scholar Program at Centre College Campus as an Outstanding Educator for his extraordinary impact on the educational development of high achieving students. Montgomery passed away on April 16, 2009.

Smith started her teaching career at Breezeel (1938-40), a one-room school in Marshall County where she taught first through eighth grades. Her starting teacher salary was $64 a month. Smith went on to teach junior high math and English for Benton Independent School District (1952-80) until her retirement (1980). Former student Charlotte Brien Wilzbach said: “Mrs. Smith established a climate of order and respect; in turn, her students were eager to please her. Furthermore, she cultivated a spirit of ownership.”

Following retirement, Smith remained active in the Kentucky Retired Teachers Association (KRTA) at the local, regional and state level. She served as treasurer of the First District KRTA for 20 years. Additionally, she served as president of the Marshall County Retired Teachers Association for 19 years, volunteered at the local hospital (30 years), and for over a half century she used her teaching skills as a Sunday School teacher in her church and as the leader of Women’s Missionary Union.

Ellen Fisk, a former student and colleague, stated: “There is an aura about her that indicates that neither young nor old have reached the peak of their accomplishments; she magnifies and conveys the abiding potential in everyone. A common mantra of hers is, ‘Can’t never could!’ ”

Smith’s children, Susan Smith Barnard of Radford, Virginia, and Phillip Smith of Lawrenceville, Georgia, will accompany their mother to the Hall of Fame induction ceremony in Frankfort.