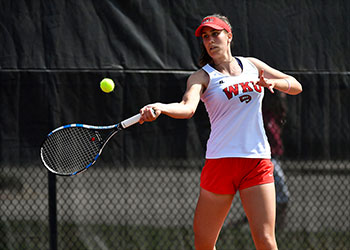 Elpida Malamou hadn’t heard of WKU until she was recruited to play tennis on the Hill. “I had only heard of Kentucky Fried Chicken. That was only thing I knew about Kentucky before I came here.”

In the past four years, the native of Ioannina, Greece, has found success on the tennis court and support on the campus. She is the winningest Lady Topper in WKU Tennis history and was selected to the All-Conference singles first team by Conference USA last spring. After graduating from WKU this spring with a major in Psychology and a minor in Athletic Coaching, she is pursuing her master’s degree in Recreation and Sport Administration – Intercollegiate Athletic Administration.

“I really like the atmosphere here at WKU. Everyone is trying to help us especially as international students. We have a lot of support from coaches, from professors, from the international office. They are always here for us whatever we need so I really appreciate that. That made my stay here more enjoyable. It’s like having a second family here.”

That support is important for Malamou and other international students at WKU. “I try to bring a Greek perspective on how to view things. But it wasn’t hard because my whole tennis team right now is international. We are from all over around the world. We share different things and different ideas and opinions. But I think it’s real important if someone is able to adjust wherever he or she is and adopt some of the cultural things. I think that is really important if you want to perform well in every field not only athletic or academic fields but in general in your life.”

Malamou isn’t sure yet what her future holds. She may return to Greece and give professional tennis a try, but she’s also considering staying here one or two more years for job experience. “I like the U.S., but eventually I want go back home. Maybe not in Greece but somewhere in Europe. I think it’s too far being here but I’ll definitely want to stay one or two more years.”

That would also give her more time to understand one part of WKU and American culture that she has yet to grasp.

“The only thing I wasn’t able to identify with is football. I don’t get this game. I’m trying to. I cheer for the Hilltoppers. But I don’t know what I’m cheering about.  I just cheer when everybody else is cheering.”

Updates from the Provost - Looking Forward