Innovative program is a winner for faculty member 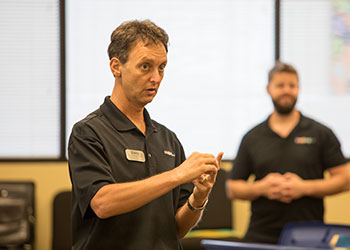 Dr. Jason Crandall, associate professor of Exercise Science in WKU’s School of Kinesiology, Recreation and Sport, didn’t know what to expect when the idea for Bingocize® began to take shape in 2011. But six years later, the preventative health promotion program for older adults that combines bingo and exercise is starting to show its strength.

The idea began while Dr. Crandall was a faculty member at Kentucky Wesleyan College and students in one of his classes wanted to start an exercise program at an assisted living facility in Owensboro. But, when students visited the facility to launch their exercise program, things didn’t go as planned because residents were participating in their regular bingo game.

“Then it hit me to combine those two things,” Dr. Crandall said. "When I first thought of it, I looked for research to see if anyone had combined bingo and exercise.

They hadn't, so he began developing the program that integrates a series of low to moderate exercises into the popular game.

Research has shown that for older adults who aren’t active Bingocize® can improve their physical health, cognitive skills, social engagement and quality of life. The exercises are designed to build strength and confidence, improve cardiovascular functions, strengthen hands and improve balance.

"Getting people to do it (exercise) is the real trick,” said Dr. Crandall, who continued research and development of Bingocize® after joining WKU’s College of Health and Human Services in 2013.

After being implemented at facilities in Bowling Green and Owensboro, Bingocize® has grown statewide and is stretching beyond Kentucky’s borders. This fall, faculty and students from WKU and six other universities will work to provide training and support to implement Bingocize® in 23 nursing home across Kentucky thanks to a $774,000 grant from the Centers for Medicare and Medicaid. An online training program has been created to implement Bingocize® in other states including Tennessee, Alabama and California.