Stuff the Bus continues to grow in impact through scholarships 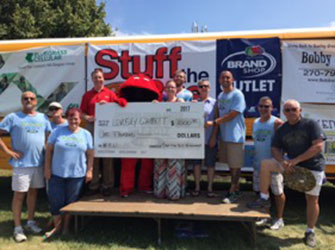 STUFF THE BUS provides an annual opportunity for community members to fill school buses with donated school supplies, which are distributed to Family Resources Centers at schools throughout Southcentral Kentucky. The Stuff the Bus event continues to grow each year, collecting more school supplies and creating opportunity for more students, and its 12th year is no exception. Three buses were parked in front of Bluegrass Wireless in Bowling Green on July 20, ready for volunteers to fill with donations that would be collected over the next four days.

Since its foundation in 2006, the growing event has spurred further interest in supporting education for Southcentral Kentucky students. Local radio personality and Stuff the Bus creator, Tony Rose, and other community members recognized the growing excitement around this event and realized the need and opportunity to support students beyond K-12 education.

In 2014, Rose established the Stuff the Bus Scholarship Fund within the College Heights Foundation at WKU. This fund awards two scholarships of $1,000, preferably to full-time students at WKU. If there are no qualified applicants enrolled at WKU, applicants attending another university in Kentucky may be considered. Recipients must be children or grandchildren of a current or retired school bus driver in one of the following Kentucky counties: Allen, Barren, Butler, Edmonson, Grayson, Hart, Logan, Metcalfe, Monroe, Simpson or Warren. Recipients must also be a graduate of a high school in one of those same Kentucky counties and must have held a part-time job during their high school tenure.

The addition of the scholarship fund completes the cycle of helping students in need from kindergarten through college graduation.

For the 2017-2018 academic year, WKU students Rebecca Ann Hurley and Lindsey Shea Garrett will be receiving Stuff the Bus scholarships. The scholarships were presented at the annual event on July 23 by Dr. Donald Smith, President of the College Heights Foundation; Tony Rose, Founder of Stuff the Bus; Big Red; and several Stuff the Bus Volunteers.  Hurley is from Barren County and Garrett is from Warren County. These students are benefitting from the vision, generosity and support of Stuff the Bus leadership and local community members.

As seems to be tradition with Stuff the Bus, the event and its associated scholarship fund will continue to grow its support for education for years to come. Later this month, WKU’s crowdfunding platform, SpiritFunder, will serve as the vehicle for the Stuff the Bus Scholarship Fund campaign aimed at increasing scholarship support provided by this fund. Much like the growing success of the Stuff the Bus event, the associated scholarship fund will continue to grow and provide scholarship assistance in perpetuity, honoring and sustaining the commitment to education made by Rose and other community leaders in 2006.