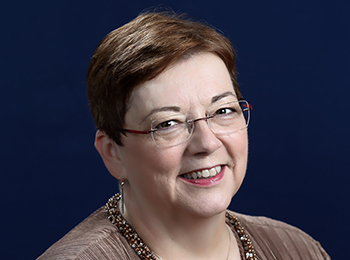 Photo caption: WKU PBS producer/director Cheryl Beckley is being recognized with the Silver Circle Award, one of the highest honors given by the Ohio Valley Chapter of NATAS.

WKU PBS, WKU’s Public Television Service, has been nominated for seven awards in six categories for the 53rd Annual Ohio Valley Emmy Awards.  Recipients will be announced during an Aug. 5 ceremony in Lawrenceburg, Indiana.

WKU’s Public Television Service has been nominated in each of the past 14 years, receiving 19 awards and will this year have had two Silver Circle Inductees.

“Our nominated project content included student safety, relevant social issues, local artist development and our regional economy. Our staff is completely dedicated to community service and providing excellent programs for our audiences,” Director of Public Broadcasting David Brinkley said. “Also, having Cheryl Beckley recognized for her service to our educational efforts and her production service, demonstrates our continuing commitment to student learning and community service. It is an honor to work alongside such talented people.”

Darius Barati (’07), Neil Purcell (’15) and Mark Toon (’15), all WKU graduates, and James Pearson were nominated this year for Lost River Sessions. This is the third consecutive year for work on Lost River Sessions to be recognized in four separate categories.

“As far as I’m concerned, these nominations belong to the community that has supported us since day one,” Barati said. “Every episode of Lost River Sessions is a collaborative effort between WKU PBS and the people of this region, and that relationship is directly correlated to the sustained success of the show.”

For the first time WKU PBS and WKU NPR have worked collaboratively on a documentary and Josh Niedwick (’03) and Lisa Autry (’01), both WKU graduates, are nominated for Fostering An Unconditional Love. Autry, as a first time nominee, said: “I am extremely honored and humbled to be recognized for this award. As a foster and adoptive parent myself, this project was a labor of love.”

Niedwick has been nominated for two different programs in separate categories which includes Fostering An Unconditional Love. “To have this program recognized for a regional Emmy provides a humbling sense of affirmation for our work, especially since I have a special connection to this project in that I myself am an adoptive parent,” Neidwick said. “This project was truly a labor of love for all of us involved in its production and it is a great honor to once again join my peers in representing the best of what WKU PBS has to offer.”

Cheryl Beckley, a 1980 WKU graduate, is being recognized with the Silver Circle Award, one of the highest honors given by the Ohio Valley Chapter of NATAS. “Being a storyteller is all I ever wanted to be and I’ve been blessed to be able to do this for my entire career. I’m honored to be inducted into the Silver Circle and want to thank everyone who I’ve worked with for being part of the journey,” Beckley said.

Robbin Taylor, WKU’s vice president of Public Affairs, said: “These Emmy nominations are a great testament to the high quality programming that our team in Public Broadcasting produces for the viewers and listeners of WKU Public Television and NPR. These are incredibly talented individuals who are passionate about their work and the subject matter. It’s also impressive that WKU Public Broadcasting will celebrate its second Silver Circle Winner in two years as Cheryl Beckley is recognized for 25 years of service in the industry. Barb Deeb was honored last year. The University is proud of our affiliation with PBS and NPR and we appreciate the value they bring to the campus, the community and to our students.”