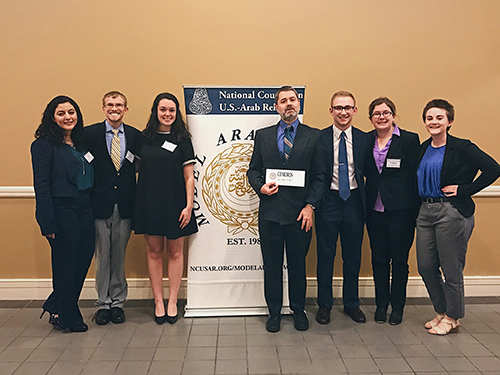 The team, consisting of six students from WKU, represented the island nation of Comoros in the three-day simulation of the deliberations of the Arab League.

WKU was invited to this exclusive competition of 25 universities based on its performance at the regional conference in Ohio. In its third year at WKU, the Model Arab League team has won numerous awards at the regional level.

Noah Stevens, an Arabic and International Affairs major from Elizabethtown, was chosen as Outstanding Delegate for his participation in a special crisis negotiation cell simulating the conflicting sides in the Yemeni civil war.

“The competition level was very high and the schools attending came from across the nation and globe to debate the issues facing the Arab World,” Stevens said. “We look forward to being invited back next year.”

Ella Shipp, an Arabic major from Owensboro, led the delegation of Social Affairs Ministers, deliberating issues such as women’s rights, treatment of prisoners and de-radicalization of militants.

Maria Riyad, an Arabic and Political Science major from Franklin, Tennessee, and Emma White, an Arabic and Criminology major from London, served on the Political Affairs Council, drafting resolutions to protect minorities, deal with Iran’s nuclear program and address the conflict in Syria.

Kathryn Williams, an Arabic major from Louisville, served on the Environmental Affairs Council, while Tyberius Knipp, an International Affairs and Asian Cultures and Religions major from Olive Hill, represented WKU on the Joint Defense Council.