WKU conferred degrees and certificates to more than 1,370 graduates Saturday at its 180th Commencement. 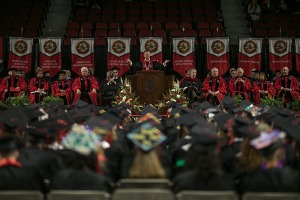 WKU President Gary A. Ransdell encouraged the members of the Class of 2016 to live their lives from the perspective of truth. “Try your best to be fair, honest and accurate in your life, no matter what you do professionally or socially,” he said. “You can have things handed to you, although most of you will not be so fortunate.

“Most of you will have to earn your success. All of you must know that thoughtful planning, prudent action, hard work and human compassion is what will bring lasting success in your life. So commit yourself to these things. It is a competitive world in which we live, so set your resolve now to compete and fight for what you know is right and good,” Dr. Ransdell said. “As you persevere through life, overcome obstacles and build relationships, I encourage you to build a global mind but keep a Kentucky heart.”

Austin Hatfield, who was recognized as the Ogden Foundation Scholar, also encouraged his fellow graduates to be “ready and willing to accept life’s challenge to live among one another striving to do what is right.” 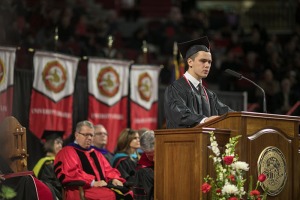 “Today we end our formal education but I stand before you today and say let it not be the end of your education but rather the beginning. The beginning of a journey of lifelong learning,” Hatfield said. “During our time in higher education we have not only learned what is necessary for our degrees but we have learned how to live.”

Hatfield, the son of Donna and John Hatfield, is a 2012 graduate of Greenwood High School and a 2014 graduate of Southcentral Kentucky Community and Technical College. His wife, Lara, also is a WKU student.

Hatfield also was recognized as a scholar of Potter College of Arts & Letters. More: View from the Hill segment on the Ogden Scholar recipient.

Scholars of the College

WKU recognized nine other Scholars of the College, who had the highest GPAs in their colleges while completing at least 60 credit hours at WKU. 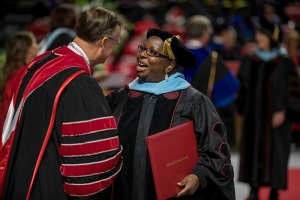 Denise Perdue was among 10 graduates of the Doctor of Education in Educational Leadership program. (WKU photo by Bryan Lemon)

Three graduates of the Doctor of Nursing Practice were recognized at the afternoon ceremony. They are (name, residence/hometown, dissertation title): Lori J. Alexander of Caneyville/Brownsville, General Nutrition Knowledge and Perceived Stress in a Rural Female Faith Community; Stacy A. Logsdon of Bowling Green/Munfordville, Perceived Health Status in Rural Manufacturing Workers; and Lisa D. Surovick of Sterling Heights, Michigan, Motivation and Intention for Lifestyle Modifications in Adults with Cardiac Risk Factors. 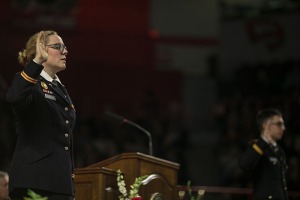 Six ROTC cadets were commissioned during the ceremonies. (WKU photo by Bryan Lemon)