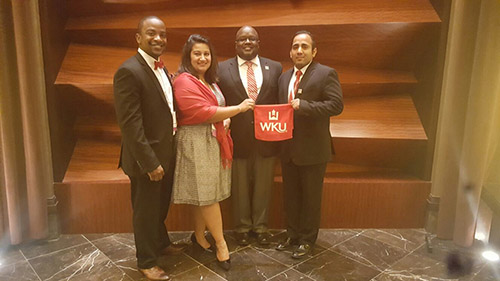 The Master of Health Administration (MHA) program competed in the 21st annual Everett V. Fox Student Case Competition hosted by the National Association of Health Services Executives (NAHSE) held in Las Vegas, NV.  The team representing the MHA program included Ms. Nadia Khan, Dr. Aditya Sharma, and Ayodeji Omosule.  The team was assigned the task of expanding mental health services in San Diego (county) California. The team focused on adding mental health services in a number of the existing community based urgent care facilities and promoted the use of bundled payments to entice private and corporate systems to consider providing a holistic, one-stop, access points for those in need of physical and/or mental health care.

The team also incorporated inter-professional components into their plan by involving the professions of Social Work and Public Health.  Additionally, one of the more unique features of their plan included a heavy reliance on Community Health Workers and Patient Navigators to assist individual’s access and utilize the health care system.

The judging of the competition was conducted by a number of hospital and system CEO’s including Keiser, HCA and the American Hospital Association among others. During the first round of competition teams were judged in groups of five. Two teams from each of the five groups advanced to the semifinal round of 10. WKU and the University of Michigan were the two teams to advance from the five teams in the preliminary round. The top 10 teams again presented their cases to an expanded panel of judges.  WKU competed well but did not advance to the final round.

Given the fact that this was WKU’s first experience in case study competition, faculty advisors, Dr. Gregory Ellis-Griffith and Dr. William Mkanta, were pleased with the team’s performance. Both professors praised the team’s dedication in preparing for the event and the poise and professionalism exhibited by these students.

This conference and this competition is one of the premiere events in the country for identifying and recruiting the next generation of health care executive talent into the health care system. In addition to showcasing the student’s talent, the MHA program’s visibility is greatly enhanced, especially with a top 10 finish. Student’s used this opportunity to begin developing a professional network and the word J-O-B was heard often. Congratulations to the students and advisors of the case study competition.