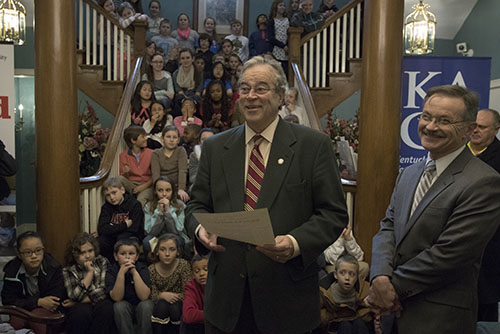 Bowling Green Mayor Bruce Wilkerson and Warren County Judge Executive Mike Buchanon signed a joint proclamation recognizing February as Gifted Education Month and noted the importance of challenging students to reach for greater heights. The proclamation called for an increase in public awareness regarding the unique educational, social and emotional needs of gifted and talented students. It also pointed to addressing the needs of all students as vital to the economic future of the region.

The ceremony was organized by The Center for Gifted Studies, which has been serving gifted children, their educators and parents for over 30 years. Julia Roberts, The Center’s executive director, was thrilled with the show of support for gifted education.

“Having City Hall filled with children from the Bowling Green Independent and the Warren County schools made the proclamation signing by Mayor Wilkerson and Judge Executive Buchanon quite special,” she said. “Staff at The Center for Gifted Studies at WKU are pleased to celebrate Gifted Education Month in Kentucky throughout February.”

The local ceremony followed a proclamation signing Feb. 4 at the Kentucky State Capitol. Several state representatives, senators and distinguished students spoke to a crowd of nearly 300 students, educators and advocates gathered in the Capitol rotunda.

For the first time in 2015, the entire month of February has been designated for gifted education advocacy in Kentucky. In the past, Gifted Education Week was held annually.

The statewide initiative was organized by the Kentucky Association for Gifted Education. Housed at WKU, KAGE promotes educational opportunities for gifted and talented youth in Kentucky.