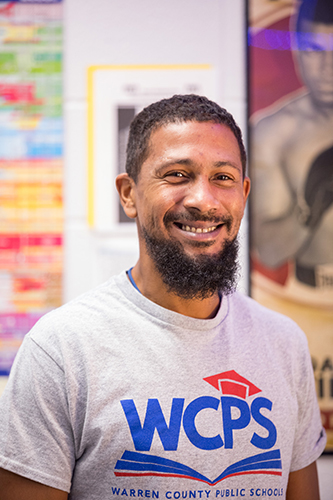 When Jan Russell Waddell Jr. began his first year of teaching in the fall of 2021, he started as a seventh-grade Social Studies teacher, Track & Field Head Coach, and Football Assistant Coach at Henry F. Moss Middle School, and then he spent every other Saturday teaching scholars with the Jonesville Academy. He did this all while taking graduate school classes to become a licensed teacher, an opportunity made possible with support from the Gamechangers scholarship.

“If I’m able to motivate students to pursue higher education, that’s a win, but the goal is to produce lifelong learners who exceed institutional walls and degrees,” Waddell said.

Waddell earned a Bachelor of Science degree in Criminology but found little work in his field. He transitioned through different jobs for ten years leading up to a factory position. While working at the factory, he began to substitute teach in 2019, which allowed him to work with several schools, including Moss Middle School.

When the factory downsized, Waddell was left with a severance package and important decisions.

“I honestly was at a crossroads in my life. Thankfully someone unknown to me recommended me for the Gamechangers Scholarship aimed at recruiting minority teachers, and I began working towards my M.A.T. (Master of Arts in Teaching) just eight days later.”

As a result of national events, a multi-cultural, interdenominational group of local leaders met to discuss issues of race, as they pertain to Bowling Green and Warren County, Kentucky. These meetings created GameChangers. GameChangers’ mission is to provide equal access and opportunity in the local workforce to the African American community.

The Gamechangers Scholarship Fund was established in 2020 as a result of the GameChangers’ steps to increase the number of African Americans in the teacher workforce. In collaboration with Bowling Green and Warren County concerned citizens, WKU, Warren County Public Schools, and Bowling Green Independent Schools, the fund supports current school district staff in attending WKU to earn their teaching credentials through WKU Graduate education programs. According to the scholarship description, “Through this fund, the legacy of the Gamechangers lives on in perpetuity.”

Due to Waddell still taking classes at Western Kentucky University, the school system considered him an Option 6 employee. According to Kentucky’s Division of Educator Licensure and Quality, Option 6 is a University-Based program that allows individuals who hold a minimum of a bachelor’s degree in a non-teaching major to pursue initial teacher certification through an EPSB-approved teacher preparation program at a participating Kentucky college or university.  This means the Gamechangers Scholarship helped pay Waddell’s tuition as he took an alternative route to teaching while he pursued his teaching certification.

Although Waddell was placed at Moss Middle School before Mrs. Rita Daniels became principal, she is glad he is a teacher at her school.

“When I first came [to Moss Middle School], the biggest thing that I wanted was to make sure that I hired people who were good people. I want people who are compassionate for kids, Daniels explained. “Having Jan is a win - someone who cares about kids and who kids love. They go searching him out.”

When students search for Waddell, he is easy to find. In between classes, he plays music in his classroom.

Imagine bits of lyrics from musician Jack Harlow’s song “First Class” playing on your way to the first class of the day. The music energizes students in the hallways of Moss Middle School. Waddell does this as one way to build relationships with his students that extend beyond the classroom.

Principal Daniels explained that Waddell built the Track & Field program at Moss Middle School because he is in the school. With students interacting with him during the day, it makes them want to be on his team.

“He started off at Central [Warren Central High School] as an assistant coach to the track team, so when he came here, he was like, ‘We need a track team.’ All of a sudden we have 20+ kids running track, and we did not have that last year.” Daniels shared that only a few students participated in track before then.

“I hope to see my students become decent, respectful and knowledgeable adults.  I hope I have an impact on someone choosing to go to college or even becoming an educator themself. My goal is to get better at what I do every year and to not get burned out like so many educators have in the past. This is my first and hopefully my only career,” Waddell said.

In addition to teaching at Moss Middle School, Waddell spends every other Saturday teaching Exploring History, Languages, and Cultures with the Jonesville Academy program. This is his second year teaching scholars in the program designed to equip underrepresented minority males in grades 3-8 with tools to succeed.

“The thing I love about teaching at Jonesville is that I get to teach students content outside of my regular curriculum,” Waddell said. “This allows me to prepare lesson plans on topics catered to my students that most public educational institutions either avoid or don’t teach at all.

One 7th-grade scholar at Jonesville Academy said, “I learn a lot from him and can tell he is passionate about what he is teaching. He has taught me so many things that I’ve never heard of and he is an inspiration to me in many things.”

Waddell’s 7-8 grade students joined together to nominate him for the Ellen Taylor Alexander Award for Outstanding Educator, which he won in 2021.

Jonesville Academy is a program of Boys to Men Leadership Group and For a Real Change, Inc. and is presented in partnership with the WKU College of Education and Behavioral Sciences, Warren County Public Schools, and Bowling Green Independent Schools. The program meets at Western Kentucky University in Gary Ransdell Hall.

Started by local nonprofits, Jonesville Academy is named in honor of the families of the former Jonesville neighborhood.

As Principal Daniels described Waddell, “He is a really good guy. He is good people. He comes from good people.”

Good people include Jan Russell Waddell Jr.’s grandmother Lavinia Gatewood, a resident of the Jonesville community that once existed where a portion of Western Kentucky University stands today.

With property becoming available to purchase through urban renewal, WKU expanded the campus with the last home in Jonesville sold in 1967. Waddell’s great-great-grandmother once lived where Houchens L.T. Smith Stadium stands today. His great-great-grandfather, a mason, built the stone wall that lines College Heights Blvd. And, his mother, Alice Gatewood Waddell, graduated from WKU and has a mural on campus.

“It feels like the University has given back a small piece of what was taken from my great grandparents and the people of their community when they were displaced from their homes in Jonesville,” Waddell shared. “I am thankful to be in the position that I am in, but I also recognize that not every descendant of Jonesville was as fortunate as me.”

“I always reflect on how the pandemic changed my life. I’m not sure if the scholarship opportunity would have been available nor as appealing to me if those sequence of events had not occurred. I am very fortunate to be a recipient of the Gamechangers Scholarship and hope to donate annually to the foundation so that other students may be presented with the same opportunity,” Waddell concluded.

Learn more about the Gamechangers Scholarship by visiting the WKU College of Education and Behavioral Sciences online at wku.edu/cebs or calling 270-745-4662.

To learn more about the Jonesville community, visit wku.edu/jonesville/. The public is invited to an exhibit and reception on October 27 titled Honoring Jonesville: Our People, Our Community, Our Legacy. Details are available online.