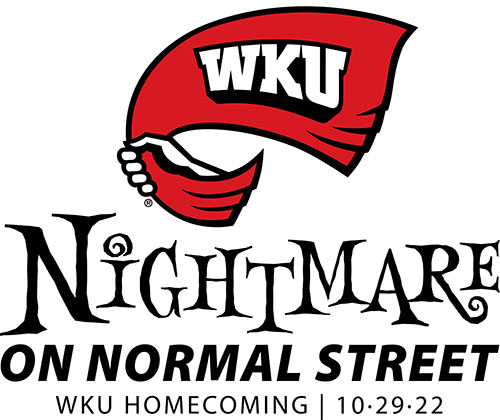 The WKU Alumni Association, in partnership with the Department of Student Activities and WKU Athletics, has announced that the tradition of WKU Homecoming will be celebrated with a “Nightmare on Normal Street” theme throughout the week concluding on Saturday, Oct. 29.

The Hilltoppers will face North Texas in the annual Homecoming football game at Houchens Industries-L.T. Smith Stadium on Oct. 29. Kickoff time, which is subject to change, is currently set for 2:30 p.m.

“In July, the WKU Student Alumni Ambassadors, the official student organization of the Alumni Association, put out a call for theme submissions to all members of the WKU Family,” Marcum said. “Though there were many wonderful submissions, the committee ultimately narrowed it down to two final options. More than 600 Hilltoppers participated in the final Instagram poll to select the winning theme, which was submitted by Kappa Alpha Psi.”

Marcum said the “Nightmare on Normal Street” theme will provide an opportunity to be creative and capitalize on the season of Halloween.

“We elected to utilize imagery that would simultaneously evoke the spookiness of the season and the whimsy you want to associate with a family-friendly atmosphere,” he said. “Big Red’s playful personality shines through, even when he is merely a skeleton.”

Marcum noted that the tradition of Homecoming is a promise to every Hilltopper.

“No matter how long it has been, no matter your experience, no matter how far you’ve traveled, there will always be a home waiting for you on the Hill,” he said. “Obviously, this week is one of the richest traditions in WKU history. As we close in on nearly a century of Homecoming celebrations, we must remember that Homecoming is not something that we relegate to one week out of the year. Homecoming means reconnecting alumni with their alma mater, and that is something that WKU strives for every day.”

In 2016, WKU was one of seven universities to earn part of a $50 million grant from the Wallace Foundation to redesign programs to prepare principals and school leaders for the reality of the job.