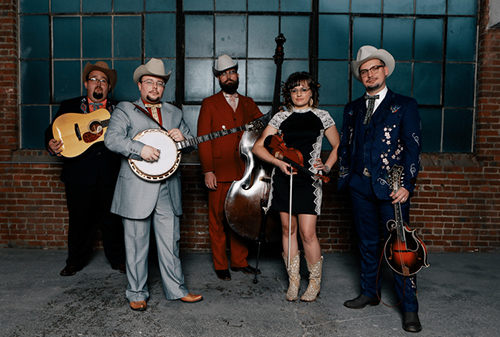 Lost River Sessions is the Emmy award-winning television, concert and radio series launched by WKU PBS and WKU Public Radio. The series explores the music scene from the roots up by featuring musical talents in the folk, bluegrass and Americana genres performing intimate live sets in various iconic venues across southcentral Kentucky.

The Po’ Ramblin’ Boys, established in the Smoky Mountains and founded by CJ Lewandowski, are a Grammy-nominated bluegrass group with Smithsonian Folkways Records. Jereme Brown (banjo), Josh Rinkel (guitar), Jasper Lorentzen (bassist) and Laura Orshaw (vocalist) make up the remainder of the band. Lewandowski primarily plays mandolin and sings. He formed the group after being approached by his employer who asked him to fill a full-time slot at Ole Smoky Moonshine Distillery in Sevierville, Tennessee. The Po’ Ramblin’ Boys are on tour across the country, and WKU Public Media is excited to welcome them for the first Lost River Sessions LIVE! event in 2022.