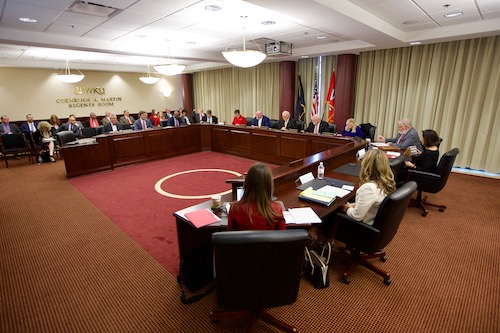 The WKU Board of Regents voted on Friday, March 4, to name the university’s Alumni Center after two longtime supporters. At its first quarterly meeting of the calendar year, the Board approved naming the building the Eva and Jim Martens Alumni Center. The naming honors a philanthropic gift of more than $5 million from the Martens, which was also announced at Friday’s meeting by WKU’s Vice President for Philanthropy and Alumni Engagement Amanda Trabue.

Jim and Eva Martens own J-Mar Properties, which invests in real estate throughout the region. Jim graduated from WKU in 1972, and the Martens have made philanthropic gifts to WKU every year for over four decades. The Martens are Lifetime Members of the WKU Alumni Association, and all four of their children are also WKU alumni. WKU President Timothy C. Caboni noted that the Martens’ sustained history of giving places them among the institution’s top donors.

During Friday’s meeting, the Board also voted to approve a Master of Science in Cybersecurity Data Analytics program. The program will be delivered entirely online, and will target working adults who are interested in pursuing careers in a variety of fields or enhancing their current employment. Students can enroll in the program beginning in the fall 2022 semester. Provost Robert “Bud” Fischer noted that the degree will utilize the expertise of existing faculty in the Gordon Ford College of Business.

Additionally, the Board approved a number of personnel actions, most notably, a 1.5% salary increase for eligible employees. The approval pertains to personnel actions that took place and have been approved through administrative channels between September 27, 2021, and December 31, 2021.

The Board also recognized the National Champion WKU Cheer Squad and coaches. The squad won the first coed national championship in program history in January by winning the Division 1A Small Coed Division of the Universal Cheerleaders Association Collegiate National Championship, hosted in Orlando, Florida. Additionally, WKU Cheer’s All Girl team finished as the national runner-up, just a fraction of a point behind the University of Alabama.

The Board also honored the late Randy Capps, who passed away on February 2. Dr. Capps served as the Parliamentarian for the Board of Regents for decades and was the founding chair of the Department of Speech and Theater, which is now known as the Department of Communication at WKU. “Randy had a gift for recognizing the potential in other people and inspiring people to pursue that potential,” said Board of Regents Chair Phillip Bale. “In honoring him, we can continue to see the potential of this university.”

Other items of business from the Quarterly Meeting included:

The Board of Regents will next meet for Committee Meetings on April 15, 2022.