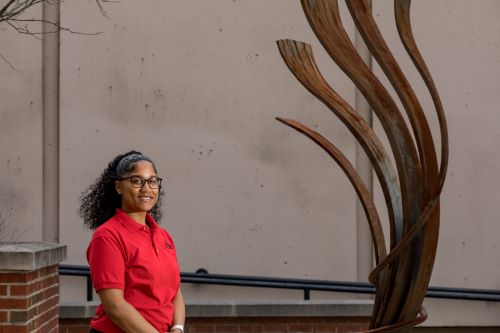 Treasure Wales, a first-generation student from Louisville earning a degree in Social Work with a minor in African American Studies, applies what she learns at WKU to her current leadership roles on campus. Her advice for fellow students, “Don’t be afraid to step out of your comfort zone and do things that you’ve never done before. Be as involved as you can.”

Wales, a TRiO student, board member for the Black Student Alliance (BSA), and a scholar and navigator for the Intercultural Student Engagement Center (ISEC), said these organizations have shaped her experience at WKU.

She fondly remembers her ISEC orientation during her freshman year of college. “The atmosphere was so welcoming and comfortable. There’s nothing like getting to know people and campus before classes actually start. Being able to have people to help you is such a great feeling. During orientation I was able to meet new people who look like me and ask questions without being judged.”

Now an ISEC navigator herself, Wales said she serves as a mentor to incoming freshman and builds trusting relationships with them. When asked what advice she has for other students coming to WKU with a similar background she said, “Work hard and don’t give up. There’s times where you will feel defeated emotionally and mentally but please keep going. All the stress will be worth it in the end.”

ISEC Associate Director Dr. Cres’Sena Thomas, said, “Treasure Wales is a great example of a student making the most of their experience here on the hill. She is not only focused on reaching her goals, but she also has been in roles that have allowed her to assist others to reach theirs as well.”

“ISEC as a whole has really made a difference in my life because it gave me a family while being away from my own. The amount of support and help I've received in just two years is amazing,” Wales said.

Her campus involvement pairs nicely with her major in Social Work and her desire to help others. Wales said, “I chose my degree program because helping people is something I've always enjoyed doing. Being someone that people can rely on is an unexplainable feeling.”

Wales credits her first Social Work class, Social Work 101, with beginning her preparation for life after graduation. “Taking that class gave me an opportunity to talk to an actual social worker in a private practice. I learned what exactly social workers do on a day-to-day basis. I also learned the dos and don’ts of social work. That class prepared me for life after graduation because it taught me to stand my ground.”

In addition to her involvement on campus, outside the classroom, at only 19 years old, Wales works as a supervisor at Kroger. “It has taught me leadership skills, listening skills, and communication skills.”

Wales is actively involved in the Black History Month activities at WKU. She helped plan Black Health Day by offering ideas for the event, as well as assisting in the planning for BSA’s “Sneaky Links,” an event centered around Black love and toxic relationships.

After graduation Wales plans to attend graduate school to pursue her Master of Social Work degree. She said, “I also plan to move out of state to start a new journey for myself.”