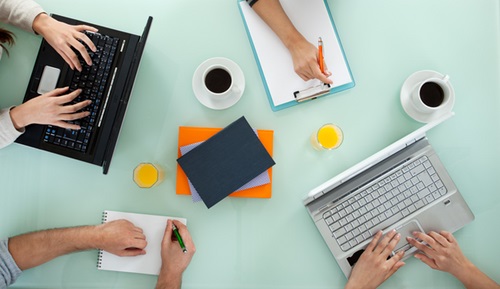 Mathews led the discussion by describing what professional writers do at KirkpatrickPrice. “We all know how to read the information we're given, and so then our role is to break it down…make it easier for the reader to understand,” Mathews stated. “We are a very integral part of KirkpatrickPrice; we are responsible for making the final product that gets delivered to our clients.” The speakers then commented on their experiences prior to starting their careers and described how they found their current positions.

Russell is the most recent addition to the professional writing team. She was unsure about where to work following her graduation in 2021 but soon found her place at KirkpatrickPrice. “I felt comfortable knowing that I would be prepared and that I had the skills. Getting to hear about why everyone liked working at KP was really encouraging, and then I was offered a position and started in June.  I really do enjoy what I do,” Russell stated. Russell credits the English Department for her skills in communication and audience analysis that she utilizes in her career.

Editors also weighed in on their experiences at KP. Slatton, lead professional writer, started out by training new hires. Her role, however, evolved into editing the audit reports after their completion. Now, KP has a small team of editors, including Sanders, that evaluates the reports. “I use my skills that I learned in the Professional Writing program daily, especially editing and publishing,” Slatton said.

The meeting concluded with the speakers providing suggestions they would give to their former selves during their time as an undergraduate. Slatton advised not to take job ads too literally. “Even if you don't meet every single requirement in the job ad, if you show passion about the work that you are potentially going to be doing, and if you're a good fit within the company, culture, and the team…those are the things that are really going to endear you to whoever you're interviewing with,” Slatton stated.

Lively also advocated putting yourself out there and mentioned the possibility of remote work. “Since COVID, there are so many positions that are hiring remotely,” Lively said. “You have companies from around the country or around the world who would be interested in you, and you wouldn’t have to relocate.”

“Don't underestimate the value of teaching yourself,” Sanders added. “A skill doesn't have to be backed by college or a certain certificate…take stuff on yourself too.”

Despite their various backgrounds and initial feelings towards information security, professional writers and editors at KP have all found a company culture they enjoy that allows them to use their skills from the English program. “We all have been able to carve our own paths, which I think is really unique to English majors and the skills that we learned during our degree,” Mathews stated.

The next Professional Writing Club Zoom meeting will be on Tuesday, March 1 at 4:30 p.m.

Veronica Pierre (mathematics and psychological sciences) is one of two students who have been awarded the Connie Foster Student Scholarship for the 2022-23 academic year.