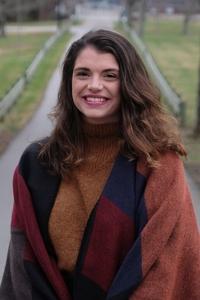 The Rangel Graduate Fellowship supports extraordinary individuals who want to help formulate, represent, and implement U.S. foreign policy through a career in the Foreign Service of the U.S. Department of State. Dudgeon will receive up to $42,000 annually for a two-year master’s degree, two paid internships in the U.S. Congress and a U.S. Embassy or Consulate abroad, and opportunities for mentoring and professional development.

Through a master’s degree in international relations, Dudgeon will study public policy with a focus on international development. “My hope is to effect bureaucratic change in refugee and immigration services, both domestically and abroad,” she said.

Dudgeon, a 2019 graduate in Arabic with a minor in Teaching English as a Second Language, has long been interested in the Middle East and North Africa region. As an undergraduate student, she earned a Critical Language Scholarship for intensive Arabic language study in Morocco, building on her proficiency gains from a study abroad program for intensive Arabic study in Jordan through WKU Global. She also participated in the Qatar Foundation International Universities Debate Championship.

After graduating from WKU, Dudgeon completed a Fulbright English Teaching Assistantship at two universities in Morocco. “I saw individuals working for the betterment of others, truly seeing them eye-to-eye as individuals with human problems and concerns,” she said. “Likewise, I saw individuals using their personal skills and experiences to cultivate global progress. After witnessing the caliber and character of their work, I knew I wanted to be part of the U.S. Department of State Foreign Service.”

Dudgeon is especially interested in the consular and public diplomacy tracks in the Foreign Service. She is currently working as an ESL and citizenship instructor at Kentucky Refugee Ministries, a resettlement agency in Louisville. This work solidified her interest in a career promoting U.S. ideals of individual mobilization and empowerment abroad.

Dudgeon thanks the Modern Languages Department and the Office of Scholar Development for their enduring support. “I was always steered toward new opportunities, both domestic and abroad, through the guidance of these two departments on WKU's campus,” said Dudgeon. “Thank you especially to my Arabic professors, David DiMeo and Lhousseine Guerwanne. Their dedication to the WKU Arabic program and each student in it shaped me into the student and professional that I am today.”

To prepare her application, Dudgeon worked with Lindsey Houchin, who is now Assistant Director of the Office of Scholar Development at WKU. “We are thrilled to celebrate the next step in Keightley’s OSD-supported pathway to her academic and professional goals, which she has paved through three nationally competitive opportunities,” Houchin said. “Because of the Rangel Fellowship, Keightley will be able to represent WKU, Kentucky, and the United States in a global career.”

About the Office of Scholar Development (OSD): The Office of Scholar Development is committed to helping WKU students in all major and degree programs develop the vision, experience, and skills to be independent, engaged scholars. OSD welcomes the opportunity to work with any WKU student interested in pursuing nationally competitive scholarships toward their academic and professional goals.

About the Charles B. Rangel International Affairs Program: The Charles B. Rangel International Affairs Program is a U.S. Department of State program administered by Howard University under a cooperative agreement with the Office of Talent Acquisition, Bureau of Global Talent Management (GTM/TAC).  The Rangel Program aims to enhance the excellence and diversity of the U.S. Foreign Service.  Established in 2003, the Rangel Program selects outstanding fellows annually in a highly competitive nationwide selection process and supports them through two years of graduate study, internships, mentoring and professional development activities.  Individuals who have successfully completed the Rangel Program are now serving as diplomats around the world, contributing to a more diverse representation and effective execution of U.S. foreign policy.  More information may be found online at www.rangelprogram.org.

KET’s “Kentucky Life” episode this week will feature the work of two WKU graduates, along with an interview with WKU History professor Anthony Harkins.