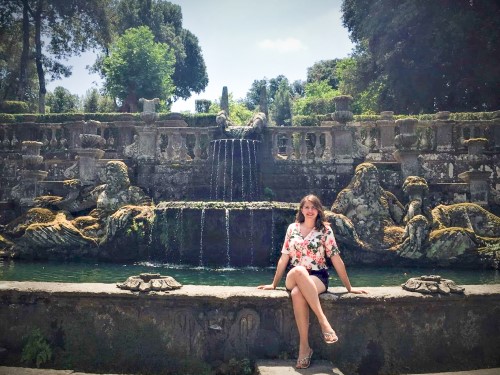 Equipped with a major in Legal Studies and English, Mahurin Honors Scholar Anna Buri (MHC ‘19) is currently tackling law school at the College of William and Mary. During her time at WKU, Anna sought to insert herself both inside and outside the classroom remarking, “Unsurprisingly, the English and History Departments were where I was most involved and thus where I felt most at home. I was the president of Phi Alpha Theta, the History Club, and Ancient & Medieval Club for a couple years, and I also was active in the English Club. It was a great way to get to know fellow students and the faculty. Given the extent of these departmental activities, I was less involved in MHC, but I still enjoyed all the various events it hosted such as the donut and puppy breaks during finals week. They were much needed!”

Like many other MHC scholars, Anna sought to further her education and challenge herself through the Capstone Experience/Thesis program. “My thesis consisted of an in-depth study of the life of Livia, the wife of the ancient Roman emperor Augustus. I used this analysis to write a film script based on her life, with the goal to remain as close to the source material as possible.”

How does a film script thesis help an aspiring law student you may ask? Anna explains, “This project gave me the opportunity to spread my creative and research wings; I was able to interweave my mythological, philosophical, historical, and Latin language knowledge into one creation. I got to write witty dialogue based on ancient text and reimagine nebulous legends with clear details. I wouldn’t say that I gained any epiphanic insight during the process, but I did hone the skill of staying true to fact while adding my own flare, something that lawyers must do when analyzing case law and then applying it to their client’s situations.”

What does Anna’s life look like now? Her current plan is “to survive law school and then secure a job advocating within the law field of art and cultural heritage.”  Anna adds, “Life has too often made clear that circumstances change so much that trying to make concrete plans is folly. I hope for a career in which I have supportive colleagues, have a healthy work-life balance, and take pride in what I do. But if I could perfectly orchestrate my future career to fit my current desires, I would be traveling around the globe, working on art repatriation cases, and preserving at-risk heritage sites.”

Reflecting on her journey thus far, Anna offers some advice to current scholars.

“As honors scholars, we often push ourselves to do it all: get the best grades, have the best accolades, attain the most impressive officer positions. But one of my most important takeaways from undergrad was how important it is to allow yourself the grace to fail. It is a noble and wonderful thing to aim high, but sometimes those heights aren’t realistic—either in the moment or ever—and that is okay. Take stock of what you have control over and what you can do better, then adapt and move on. Your worth is not determined by a letter grade or a number or fancy Latin words at the end of your name, and dwelling on that which is out of your control will only give you undue stress. Sometimes your current situation is not ideal; sometimes it’s due to your own actions, and sometimes it’s completely out of your hands (but, if my personal experience can be extrapolated to most people’s lives, usually it’s a little of both). The important thing is to give yourself permission to admit you’re not perfect and that not everything will be exactly how you envisioned and hoped it would be. You are no less valuable or worthy because of it. And sometimes allowing yourself to stray from your meticulously planned path leads to much better avenues you never would have otherwise considered. Like summiting our own beloved Hill, just take it one step at a time; you’ve got this.”

Anna Buri represents creative academic dedication, and we are proud to call her a Mahurin Honors College scholar and alumna.