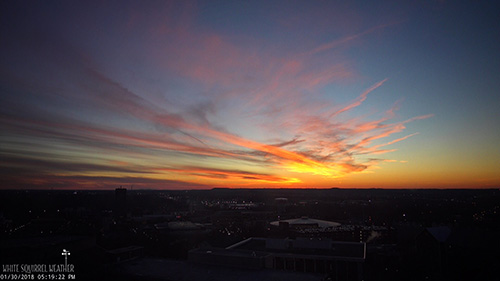 A student-run meteorology group at WKU has been included in the top 100 meteorology social media accounts by AtmoLife.

White Squirrel Weather is an applied research, professional student service-learning initiative at WKU comprised largely of students who have each devoted their efforts toward providing focus-based real-time observations and forecast weather content to the WKU campus and community for the purposes of hazards mitigation, and emergency preparedness and management.

AtmoLife’s unranked list recognizes those in the atmospheric science community who bring their unique scientific perspectives to Twitter in the most intriguing, informative, thought provoking, humorous or jaw dropping fashions.

White Squirrel Weather was cited for “providing fun and easy to discern weather information for Western Kentucky University. Other university meteorology organizations need to take notes from these folks!”

“I like that last line,” said Josh Durkee, associate professor of Meteorology at WKU and director of White Squirrel Weather. “In the ‘Academic Organization’ category, the only listed three institutions: Penn State, North Carolina State and us. So we are in great company!”