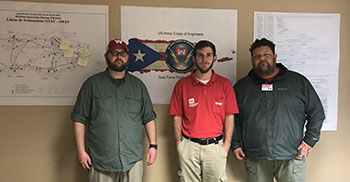 Three alumni from WKU’s Department of Geography and Geology who work for the U.S. Army Corps of Engineers (USACE) have been assigned to Puerto Rico to assist in post-hurricane recovery efforts.

“Our alumni’s activities demonstrate the value and importance of a spatial perspective on natural-disaster recovery efforts,” said Dr. David Keeling, University Distinguished Professor of Geography. “Their GIS skills are facilitating a very localized and mappable understanding of power infrastructure and delivery challenges in Puerto Rico. As has been widely reported, the majority of Puerto Rico’s population remains without power weeks after the hurricane, and GIS is helping to speed along the recovery and rebuilding efforts.

“Careers utilizing GIS skills are among the most attractive, well-paying and exciting opportunities for students seeking meaningful employment after graduation. As these efforts by our alumni in Puerto Rico demonstrate, having strong GIS skills literally can help save lives and rebuild infrastructure after a natural disaster.”