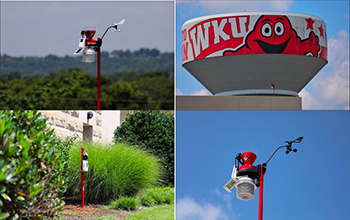 The long-range forecast calls for continued success for White Squirrel Weather at WKU.

At its launch in October 2016, White Squirrel Weather was staffed by Dr. Josh Durkee, Associate Professor of Meteorology and Director of WSWX; Jonathan Oglesby, Health and Safety Specialist/Creative Science Director for the WKU Meteorology Program; and two undergraduate students. The infrastructure consisted of one automated weather station, located on top of the Environmental Science and Technology Building. One student coded the website that broadcasts a 2-minute update cycle of campus weather data, including temperature, moisture, humidity, pressure and wind, along with the spectacular campus and sky view from the roof of Van Meter Hall. The other student maintained the group’s social media presence on Twitter.

“The idea behind White Squirrel Weather was to develop an innovative strategy for students interested in meteorological forecasting, emergency management, and broadcast meteorology to practice and apply what they’ve learned in the classroom, but in a way that provides a tangible service outcome to various entities across WKU,” Dr. Durkee said. “With this service-learning model, our students are gaining important professional experiences that can help them be successful after graduation and the university can benefit in a whole host of ways.”

Now a year later, he said, the success of the White Squirrel Weather operation is demonstrated via a variety of community partnerships and services that elevate the WKU community with regard to weather-related decisions that have a positive impact on the health and safety of university students, staff, faculty and visitors.

“Our Visual Design and Science Communicator, along with our two Web Architects have done a fantastic job putting together a visually stunning desktop experience,” Dr. Durkee said. “The White Squirrel Weather Broadcast/Social Media handlers have also done an exceptional job of growing our social media presence.”

The @WKUweather Twitter account has more than 4,700 followers, making it among the top-followed WKU-affiliated accounts for the university. The group recently launched its presence on SnapChat (wkuweather) and Instagram (@wkuweather) as well.

WeatherSTEM is a science, technology, engineering and mathematics (STEM) outreach-based company out of Tallahassee, Florida, that focuses on education, public and sports health and safety, and agriculture through the deployment of innovative weather instrumentation, data and education content. WeatherSTEM has more than 360 weather stations installed across the country, including prominent locations such as Heinz Stadium where the NFL’s Pittsburgh Steelers play. White Squirrel Weather is the flagship WeatherSTEM operation in Kentucky.

“WeatherSTEM is an important piece to the WKU White Squirrel Weather service,” Dr. Durkee said. “After reaching out to the CEO, Ed Mansouri, we quickly realized a partnership between the two groups was a natural fit. WeatherSTEM is a fantastic company to work with to help us achieve our goals at WKU.”

Mansouri added: “I wanted WeatherSTEM to be involved with White Squirrel from my very first conversation with their Director, Dr. Josh Durkee. The program represents a nexus between education, health and safety, and university outreach that will provide great value to the citizens of Kentucky and we’re thrilled to be part of the project.”

With the help of WeatherSTEM, White Squirrel Weather added a weather station at the Hattie L. Preston Intramural Sports Complex near the WKU South Campus, along with a highly customized weather sensor suite to the Houchens Industries-L.T. Smith Stadium and Nick Denes Field.

“We became very interested in working with WKU Athletics and the Department of Environmental Health and Safety to provide the ability to measure specific conditions on the fields and in the stands,” Dr. Durkee said. “Now with our incredible new robust stadium monitoring suite, we can provide turf temperatures, air temperatures just above the turf where the players compete, temperature and humidity conditions in the stands, and advanced workload-hydration metrics for athletes training or competing in stressful heat situations.”

With the growing success of White Squirrel Weather and its services, the group partnered with WKU Regional Campuses to add weather monitoring and prediction instrumentation and services. In addition to the three locations at the WKU main campus, White Squirrel Weather has monitoring stations and predictions services at the WKU Glasgow, WKU Owensboro and at the Early College and Career Center (EC3) in Elizabethtown.

EC3 is partnered with WKU Elizabethtown-Fort Knox, Elizabethtown Community and Technical College and Sullivan University with the mission to bring students together from Central Hardin, John Hardin and North Hardin high schools for advanced learning initiatives.

“We’re so excited to implement a weather network that benefits WKU facilities across the state,” Dr. Durkee said. “Since we are particularly focused on WKU recruitment and student engagement with education outreach, it made perfect sense to expand our reach. Notwithstanding, we have beautifully custom painted and branded equipment that is visible for all to see. This puts WKU on the map in a new, exciting way.”

“Right now, we are working with WeatherSTEM to fine-tune the array of safety alerts for our users,” Dr. Durkee said. “Such alerts include lightning strike times and locations, turf or air temperature warnings, workload hydration alerts, wind warnings, as well as providing users with the ability to tailor these notifications for any our system’s observations. We are very close to finishing this phase of the project and we think everyone is going to really find it quite useful.”