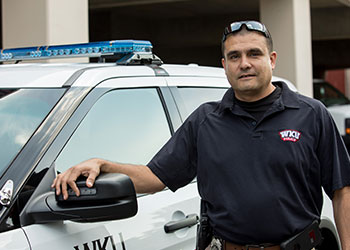 WKU Police Sgt. Rafael Casas grew up in Houston and still has family in the area. So when heavy rainfall from Hurricane Harvey left his sister’s home and others flooded, Casas knew he needed to help. On Aug. 30 after he loaded supplies at the Bowling Green Fraternal Order of Police Lodge, he was featured in a news report on WBKO-TV. “The outreach I got from that story was unbelievable,” he said. “People in my neighborhood began talking among themselves and I came home two days in a row with stuff sitting on my porch.”

Thanks to the generosity of the local community and the donation of a trailer, Casas was able to haul school supplies, medical supplies, cleaning supplies, bleach, detergent, non-perishable food items and much more to his sister’s neighborhood.

“We were fortunate and had a lot of help,” said Casas, who has lived in Bowling Green about 24 years and has been with WKU Police for 16 years. “It worked great. It was a long ride, but it was very well worth it.”

Casas and his nephew Alfred Galindo began their 17-hour trip after the WKU football game on Sept. 2 and arrived in Houston late in the afternoon on Sept. 3. Casas’ sister, Monica, had 3½ feet of water inside her house so they helped with removal of drywall, cabinets, countertops, appliances and other items damaged by the floodwaters. They also distributed the much-needed supplies in his sister’s neighborhood and other areas. Remaining items were taken to the Houston Northeast Police Station for distribution. “Everyone was grateful. It was a good experience and I would do it all over again.”