Chief Justice Minton to be featured at 'An Evening With' program on Oct. 11 | Western Kentucky University Skip to main content

Chief Justice Minton to be featured at 'An Evening With' program on Oct. 11 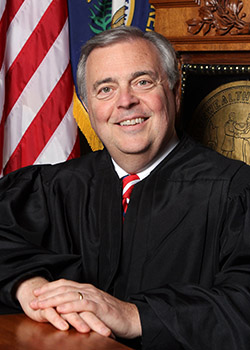 WKU will host Chief Justice of Kentucky John D. Minton Jr. through the new An Evening With program on Oct. 11.

The event, sponsored by the Society for Lifelong Learning at WKU (SLL) and the WKU Alumni Association, will feature an intimate, moderator-led interview about the most pressing issues facing our state and our nation, followed by a Q&A session with the Chief Justice. The interview will be led by WKU alumnus, global entrepreneur and local author Larry Gildersleeve.

Minton was elected to the Supreme Court of Kentucky in 2006 and re-elected to another eight-year term in 2014. He has served as Chief Justice of Kentucky since 2008. In 2016, he became the first chief justice from Kentucky in nearly 25 years to be elected President of the Conference of Chief Justices and Chair of the National Center for State Courts Board of Directors. He is a WKU alumnus and resident of Bowling Green.

The event will take place at 7 p.m. Oct. 11 at the Augenstein Alumni Center, 292 Alumni Ave., on the WKU Bowling Green Campus.

Admission to this WKU Homecoming Week event is free, but reservations are required. To RSVP, visit wku.edu/sll/aew.php by Oct. 9.

The Society for Lifelong Learning was founded in 2014. It is a member driven organization dedicated to offering a wide range of high quality, intellectually stimulating, non-credit educational programs and experiences for ages 50 and over who have a love for learning.

View from the Hill: QatarDebate Majlis dedicated at WKU

A unique study space that reflects the Arabic culture has been dedicated at WKU’s Mahurin Honors College. WKU’s Amy Bingham has more on the impact this space will make on students in this week’s View from the Hill.

WKU listed among 'Best for Vets' for 9th straight year

For the ninth consecutive year, Western Kentucky University has earned national recognition as a “Best for Vets” school by Military Times.

The Beacon Project, a new program at WKU, is lighting the way to college success for students who were part of the state’s foster care system.

For the ninth consecutive year, Western Kentucky University has earned national recognition as a “Best for Vets” school by Military Times.