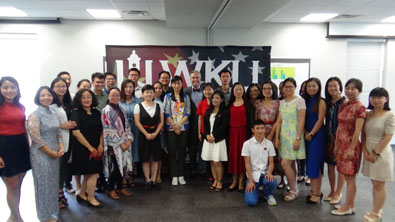 In preparation for the 2017-18 academic year, the Confucius Institute at WKU welcomed new teachers and completed its Confucius Day activities.

The CI at WKU fall activities began July 15 when all 55 teachers arrived for the 2017-18 school year. Of the 55 teachers, 24 have returned for another year, 31 are new teachers (23 are seeking alternative route to become Kentucky certified teachers) and one is a new 1 + 2 MAT (Master’s in the Art of Teaching). This year, the CI at WKU will be in 47 schools in 22 districts, reaching more than 19,000 students registered in Chinese language and culture classes.

Confucius Institute Day activities began on Aug. 17, as President Timothy C. Caboni welcomed the CI at WKU Chinese teachers at a reception, citing their work as important to giving students in Kentucky an opportunity to become competitive in the global society. In addition, superintendents, principals, district coordinators and host families were thanked for their support of the CI at WKU program.

The CI at WKU was one of many partners who sponsored the “2017 Solar Eclipse” glasses and lanyards for K-12 students throughout the state as well as WKU students, faculty and staff.

Confucius Day activities continued through September with the following events:

About the Confucius Institute: The CI at WKU is a conduit of all that is China. These partnerships are far reaching that will not only create or advance research for faculty/staff, but offer research and internship opportunities for WKU students. Anyone interested in collaborating with us or interested in creating programs, contact Terrill Martin at (270) 745-2530.