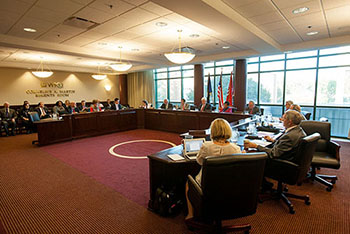 The budget is 2.8 percent more than 2016-17 and includes the General Assembly’s approved equity adjustment of $2.34 million in the state appropriation. State appropriation makes up 18.1 percent of the total budget.

“We are pleased to receive additional state dollars that will fund 1 percent cost-of-living salary adjustments for full-time employees last January and in July,” WKU President Gary A. Ransdell said.

The budget also includes $265,700 more in performance funding than the 5 percent ($3.56 million) WKU was required to put into the Performance Funds Pool. Provost David Lee said, “WKU has and will continue to perform well in student success performance metrics that are likely to contribute to increased state funding.”

Other budget highlights include:

*A $145 per semester increase in resident undergraduate tuition, second lowest among Kentucky public institutions, which has been approved by the Kentucky Council on Postsecondary Education. Tuition and fees account for 48.7 percent of the total budget.

*About $479,000 for strategic priorities directed at improving student recruitment and retention, including the hiring of new professional advisors.

*About $175,000 to replace lost state funding for student accessibility services.

*Elected officers for 2017-18. Dr. Phillip W. Bale of Glasgow will be chair; Gillard B. Johnson III of Nicholasville will be vice chair and Frederick A. Higdon of Lebanon will be secretary.

*Recognized Dr. Gary A. Ransdell, who retires as president June 30.