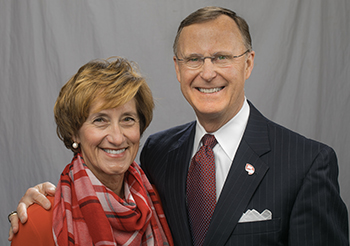 This fall, Dr. Gary A. Ransdell (’73, ’74) and Julie Ransdell (’75) will join WKU’s Hall of Distinguished Alumni. As new members of the 26th class of noted alumni, the Ransdells will be recognized during an 11 a.m. luncheon on Oct. 13 at Sloan Convention Center.

Popularly known as “Team Ransdell,” the duo served WKU as President and First Lady from 1997 through 2017.

Dr. Ransdell received his Bachelor of Arts degree in Mass Communications from WKU in 1973, a Master of Public Service degree in Public Administration in 1974, and a Doctor of Education degree from Indiana University in 1978. He rejoined WKU as President after serving four years as Vice President for Administration and Advancement and seven years as Vice President for Institutional Advancement at Clemson University in Clemson, South Carolina. His previous professional experiences at WKU also included service as a field representative in the Office of University School Relations from 1974 to 1976 and as Associate Director of Alumni Affairs from 1978 to 1981. Dr. Ransdell served as Director of Alumni Relations at Southern Methodist University from 1981 to 1987.

Julie Ransdell earned a Bachelor of Science degree in Elementary Education from WKU in 1975. Prior to the Ransdells’ return to WKU in 1997, she taught for Russellville and Barren County schools in Kentucky and in elementary schools in Bloomington, Indiana, and Clemson, South Carolina. The Ransdells met, dated and were married while at WKU pursuing their undergraduate degrees. They have two sons — Patrick (’02) and Matthew (’06), both lettermen with the WKU Baseball team. Patrick and his wife, Brooke (’04), were married in August 2004 and are the parents of Walker and Collins Ransdell. Matthew and his wife, Sandra, were married at WKU’s Chandler Memorial Chapel in April 2014.

If one word could define the 20-year tenure of WKU President Gary A. Ransdell, it would be “transformational.” Indeed, when he was hired in 1997, the Board of Regents challenged Dr. Ransdell to achieve a lasting transformation of Western Kentucky University, one that would redefine the WKU experience and impact the overall campus culture, infrastructure and academic quality. Dr. Ransdell and the WKU Board of Regents led the campus through a dramatic transformation from a university of regional importance to a leading American university with international reach. Over the 20-year period, WKU enrollment swelled from 14,500 to as high as 21,000, and annual graduation numbers grew from 2,500 to 4,200. The applicant pool doubled to top 14,000, and student retention grew from 67 percent to 76 percent.

Another key element in the transformation of WKU was the growth in private support. WKU completed its first capital campaign on June 30, 2003, with $102 million in gifts and pledges. A second campaign was completed on June 30, 2012, with $202 million in new gifts and pledges. Other measures of progress included a dramatic push in sponsored research; the growth of new degree programs in electrical, mechanical and civil engineering; four new doctoral degree programs in Education, Nursing, Physical Therapy and Psychology; a new emphasis on the commercialization of intellectual property and the transfer of WKU technology to the Kentucky workplace; growth of the three WKU regional campuses in Glasgow, Owensboro and Elizabethtown/Ft. Knox; the creation of The Gatton Academy of Mathematics and Science; Kentucky’s first independent Honors College with enrollment of 1,400 high-achieving students; the largest number of distance-learning courses among Kentucky’s eight universities; expanded study abroad programs; and a record number of international students enrolled on the Bowling Green campus. As a couple, the Ransdells were particularly engaged with students learning in other countries. They traveled with students taking course credit in England, France, Italy, China, Ecuador, Africa, Scandinavia, the Galapagos Islands and Iceland. WKU’s athletic programs also have been transformed during Dr. Ransdell’s tenure with facility upgrades and improvements, a move from the Sun Belt Conference to Conference USA, the transition of WKU Football to the Football Bowl Subdivision level and more than 100 conference championships. WKU also leads Conference USA in academic performance.

Julie Ransdell will always be considered one of WKU’s greatest treasures. She spent 20 years working both quietly behind the scenes and on the front lines of leadership alongside her husband. She willingly hung up her teacher hat in 1997 when Dr. Ransdell was named WKU’s ninth President. During the years under Dr. Ransdell’s leadership, Julie Ransdell played an active role in giving back. She entertained guests and dignitaries on campus, managed intricate event details, and excelled in building important relationships with alumni and donors. She also made a mark upon countless WKU students as a mentor, friend and mother figure, and she frequently hosted student groups at the President’s home on Chestnut Street.

A large part of Julie Ransdell’s contributions related to philanthropy, and a key factor of the University’s transformation under Dr. Ransdell, was the dramatic increase in private giving and revenue generated through two capital campaigns. One of the fundraising projects that was near to her heart was her service as Co-Chair of the WKU Sisterhood, a group of women who pool their resources to support worthy projects at the University. Each member of the WKU Sisterhood commits to a gift of $1,000 per year, and the donations are placed into a restricted fund. Faculty, staff and students are invited to apply for funding from the WKU Sisterhood, and the full membership of the group votes on the distribution of the funds at the annual business luncheon each fall.

The Ransdells have also made their personal philanthropy an important part of their legacy, as they made a generous commitment to WKU in their own estate plans through the creation of the Ransdell Family Fund for Presidential Excellence, a discretionary fund to benefit all future presidents of Western Kentucky University.

Together, Team Ransdell worked tirelessly to transform WKU, often referring to their time in leadership as “the pride and passion” of their lives.