WKU honors 'heroes who answered the call to defend our freedom' 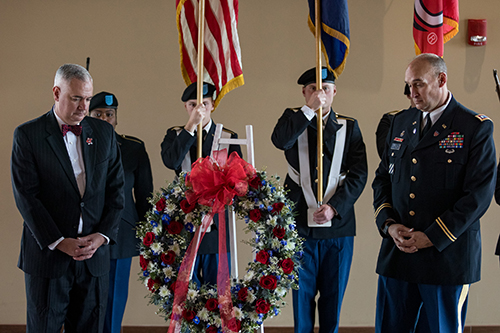 The wreath-laying ceremony moved indoors to Nite Class in the Downing Student Union due to rain Friday morning.

“Here, near the Guthrie Bell Tower, we look upon the images of those who served in order for us to live freely,” President Caboni said. “I remain humbled by these individuals - and all of our Hilltoppers - who faithfully served and continue to serve our country. We are grateful for their selflessness, for their boldness and for their valor.”

President Caboni thanked veterans and military personnel for their service and thanked their families and friends for their support and personal sacrifices.

“And to our WKU ROTC cadets, thank you for choosing military service and for putting our nation before yourselves,” he said.

“May all who pass by that Bell Tower, at the center of our campus, and all those who hear its carillon, be reminded of every individual who has fought and continues to fight for our freedom and for our nation.”