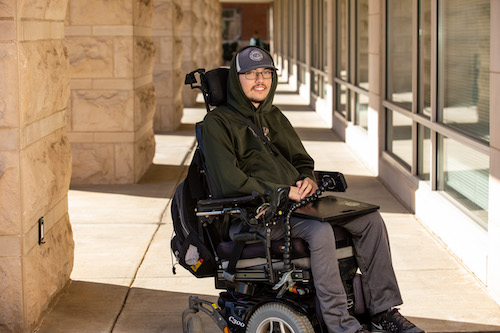 Bonebrake, who was paralyzed in a sledding accident in 2015, received an International Association of Geoscience Diversity Student Pathways Scholarship. He is majoring in Environmental, Sustainability, and Geographic Studies with a certificate in Geographic Information Science.

“I’m grateful to be able to have this opportunity,” Bonebrake said. “I was really blown away at first because it’s one of those things where you don’t really think you’ll be the one selected.”

In the spring semester, Bonebrake will be working on environmental/water projects as part of WKU’s Center for Human GeoEnvironmental Studies (CHNGES) research team.

“Austin is most deserving of this scholarship and I am proud of his academic efforts,” said Dr. Jason Polk, Professor of Environmental Geoscience and Director of CHNGES. “He approached me this semester to start working on research using GIS to analyze groundwater flooding issues in Bowling Green as part of a larger project and in collaboration with WKU’s Center for GIS.”

Bonebrake expects to graduate in December 2022. “I like anything to do with the GIS side of environmental science,” he said. “I think that’s going to be where my main focus is once I graduate from WKU.”

Dr. Leslie North, Interim Chair of WKU’s Department of Earth, Environmental, and Atmospheric Sciences, said: “This scholarship is a great international recognition for students with disabilities who are studying geoscience. We are so proud of Austin and what he has achieved despite being faced with adversity. No matter what challenge he faces, he puts in the effort to be successful in his classes. He is a wonderfully thoughtful and inspiring student who we love having as part of the EEAS family.”

Dr. Polk said he has been impressed by Bonebrake’s initiative to continue building skills toward his future and was grateful he was selected for the IAGD scholarship. “IAGD is an excellent organization and I’ve learned a lot and benefited greatly being a member, including being able to share opportunities like with this our students,” Dr. Polk said. “Austin is a very engaged student who demonstrates that anything is possible when you show up and work hard, no matter the obstacles, and take advantage of every opportunity presented.”