Ten years of planning and construction peaked in a celebration Wednesday for the gold-level certification of Ransdell Hall in Leadership in Energy and Environmental Design.

LEED, a third-party verification system to determine a building’s environmentally friendly construction and design, has four different ratings — Certified, Silver, Gold and Platinum — with each one increasing in difficulty of completion and environmental friendliness.

Ransdell Hall is the first building on campus to be built with LEED certification in mind and achieved the level above what was expected by university officials during construction. Kentucky state legislature’s House Bill 2 now requires buildings costing more than $25 million to gain the minimum certification. 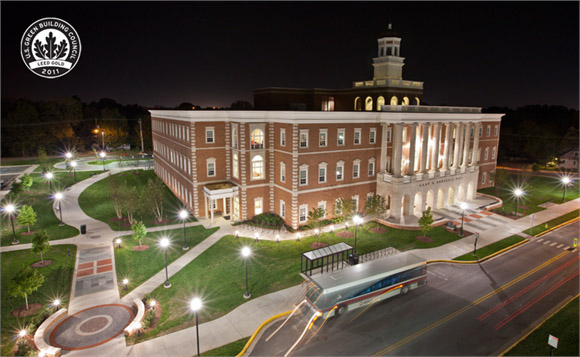 “It’s a really big accomplishment for us as a university,” he said. “Obviously this has been the first one for WKU, and it really sets the stage for future buildings which will also carry LEED certification status of some sort.”

Bryan Russell, director of Planning, Design and Construction, agreed that the milestone will lead to more LEED projects in the future.

The new music hall, which is set to open in January, will cost $9 million but is designed to be LEED Silver — a level above the state-required minimum, Russell said.

“We continue to strive with each building to be very sustainable,” he said. “We’ve had a very conscious effort in improving behind-the-scenes in an effort to not only improve our environment, but we are reducing our overall energy usage.

“Even though we’ve been expanding with new buildings, we have been able to reduce our overall usage which helps us now and in the future.”

WKU’s desire for Ransdell Hall is more than a decade old, but state funding was secured for the building in 2006.

In April 2008, WKU completed the design process, and Ransdell Hall was registered with the U.S. Green Building Council, the third party which developed the LEED process.

Ground was broken in October 2008 and construction was completed in November 2010.

The building was opened for classes Jan. 25, and the building’s dedication ceremony to President Gary Ransdell took place April 29.

The U.S. Green Building Council issued its rating last Wednesday, but WKU waited to release the information until today when a ceremony could take place.

The experience gained in the long process of constructing Ransdell Hall will benefit all future construction at WKU because each building will meet LEED certification standards, said Sustainability Coordinator Christian Ryan-Downing.

“First, we know we can do it, so there is nothing to hold us back now,” Ryan-Downing said. “Also, LEED design and certification process is very complicated. Having gone through the experience once prepares us for the next project, and with each LEED project, we will get better at it.”

Nate Allen, schools advocacy lead for the U.S. Green Building Council, was in attendance Wednesday evening. He said the building was a “landmark accomplishment” for WKU.

The celebration consisted of three small speeches and was a small affair with about 30 staff members attending from the Department of Facilities Management and the Department of Planning, Design and Construction.

But the occasion was a “big” one for the future of construction at WKU, Russell said.

“It’s fun and really exciting,” he said. “It’s one of those compliments that makes you smile.”

Back to: Gary A. Ransdell Hall

Office of the Dean