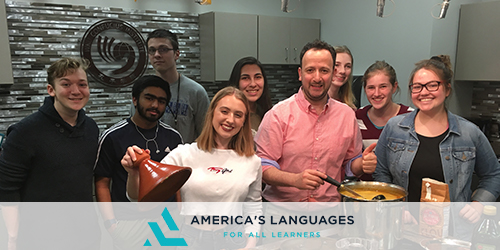 The Gatton Academy is one of the first five educational programs in the nation to be recognized.

America’s Languages Guide was initiated in 2017, and the Guide to Exemplary Programs and Practices in U.S. Language Education section launched in 2020. The intent of the America’s Languages Guide is to identify exemplary programs focused on improved practices. To be included in the Guide, The Gatton Academy’s STEM + Critical Languages program was vetted through a nomination process, a written application, and a peer review that identified the program as a national exemplar.

Critical languages are designated by the U.S. Department of State as those in high demand to address national economic or security opportunities, but little taught in United States classrooms. The Gatton Academy’s STEM + Critical Languages program addresses this critical national need by preparing future STEM professionals ready to collaborate globally.

Russian instructor Ekaterina Myakshina teaches Gatton Academy students at all levels of Russian and advises Russian Club. “Teaching my native language to Gatton students is extremely gratifying to me,” Myakshina said. “I have a chance to see students make their first steps and grow—from learning the alphabet to writing short stories, from exchanging greetings to speaking about topics beyond their own lives.”

The STEM + Critical Languages program engages students beyond the classroom. The Gatton Academy hosts STEM + Talks each semester, designed to foster community amongst the language cohorts, increase exposure to instructors, and guide students on high school, undergraduate, and career opportunities available to learners of critical languages.

One Arabic instructor, Lhousseine Guerwane, encourages students to get involved in one of four Arabic speaking or debate clubs.

By students forming such linguistic and cultural communities, Guerwane sees a compounding benefit. “They educate others in the community such as their friends and families,” he said. “And after my students return from their study abroad trips and competitions, they are usually interviewed by the university media and local newspapers.” These reports, Guerwane said, “help battle ignorance and spread respect in the community.”

While The Gatton Academy’s STEM + Critical Languages program is set up for beginning learners, there is versatility for students who may arrive with a partial background in language learning or with specific language learning goals.

These choices allow students to tailor learning to their interests and based on their prior knowledge. Peng noted that true beginners, heritage learners, and students with a certain level of proficiency are all appropriately challenged.

Because of The Gatton Academy’s commitment to language learning, 46 Gatton Academy students have received National Security Language Initiative for Youth (NSLI-Y) scholarships over the last decade. These prestigious scholarships from the U.S. Department of State fully fund immersive language study and host family stays around the world for summer and gap years.