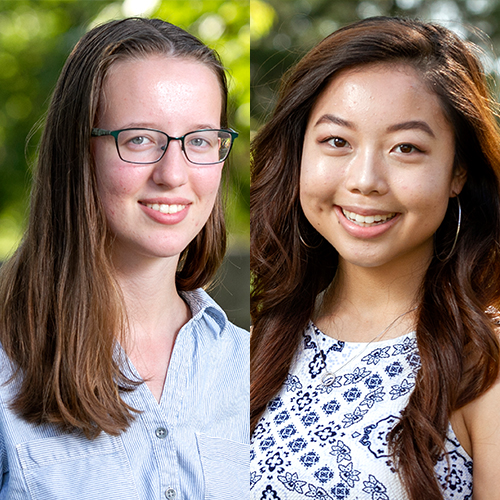 Two students at The Gatton Academy of Mathematics and Science have received national recognition for their achievements in computing. First-year Gatton Academy student Mina Ryumae (Larry A. Ryle High School) of Union and second-year student Sierra Wyllie (Henry Clay High School) of Lexington both received Honorable Mentions in the National Center for Women and Information Technology (NCWIT) Awards for Aspirations in Computing (AiC).

Wyllie and Ryumae were on the shortlist of this year’s 400 national recipients.  Over 4,700 applications were received.

Each year, U.S. high school students in grades 9 through 12 who self-identify as women, genderqueer, or non-binary are eligible to receive recognition for their aptitude and aspirations in technology and computing, as demonstrated by their computing experience, computing-related activities, leadership experience, tenacity in the face of barriers to access, and plans for post-secondary education. This year the NCWIT AiC received applications from 48 states, the District of Columbia, Puerto Rico, the U.S. Virgin Islands, Guam, and all U.S. overseas military bases, including two Gatton Academy students.

Wyllie has been involved in computer science research at Western Kentucky University’s School of Engineering and Applied Sciences over the last two years where she is mentored by Dr. Michael Galloway and Ismail Abumufouz. She was a summer 2019 recipient of a Gatton Research Internship Grant for her research in network security.

“With computer science and artificial intelligence, we can now solve problems with super-human accuracy. It is exciting to be a part of the development and future of this technology,” Wyllie stated. “The recognition from NCWIT allows me to connect with both peers and professionals via the AiC community, which will prove invaluable as I become increasingly involved with computing. It also provides scholarship and internship opportunities, which will assist my transition from the classroom into industry.”

“Ever since I joined FIRST Robotics in kindergarten, I realized I had the logical mind and passion for coding that would continue. I love that there are always many different ways you can approach a question and there are always workable solutions. Computer Science affects almost everything these days. I want to be part of the impact by being able to develop software or applications that affect people around the world,” Ryumae stated. “Competing in NCWIT is an incredible opportunity to network with my like-minded peers from around the nation, but also with business professionals and other influencers in the field. It has given me the chance to be a part of the movement towards encouraging more women to pursue fields historically dominated by men.”