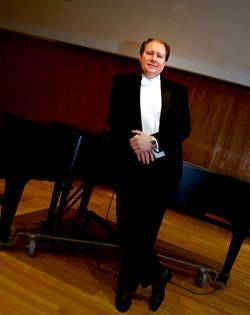 An experienced concert and recital artist, Wayne Pope has shared his “rich, clear baritone voice” with audiences throughout the US, Italy, Bulgaria, England and Israel.  He has been featured with many US orchestras in works such as Brahms’ Ein Deutsches Requiem, Handel’s Messiah, Mozart’s Requiem, Vaughan Williams’ Five Mystical Songs, and Beethoven’s Christ on the Mount of Olives as well as standard opera and oratorio works.  His performance of Vaughan Williams’ Fantasia On Christmas Carols with the South Arkansas Symphony, under the direction of Kermit Polling, was featured on National Public Radio’s Performance Today with Martin Goldsmith.  His opera credits include leading roles with Columbia Lyric Opera, Orchestra Kentucky, and The Colorado Music Festival, as well as various university guest artist appearances.  He performed the title role in the world premiere of The Martyrdom of Saint Polycarp by the noted film and television composer JAC Redford.   Subsequent performances of Redford’s oratorio included an Italian tour and premiere at the Chiesa Nuova (the birthplace of oratorio) for Rome’s annual Oratorio Festival.

Dr. Pope is currently Professor of Voice at Western Kentucky University where he is the Music Director and Conductor of the Maninstage Opera Theatre and Voice Area Coordinator.  He has served on the Board of Directors for the National Association of Teachers of Singing and is past Governor of their Mid-South Region.  His students are engaged in performance careers from opera to Broadway, professional theatre, national tours, television and movies and in education from elementary to university.  Pope and his wife Beth, who teaches voice at WKU, reside in Bowling Green, KY.