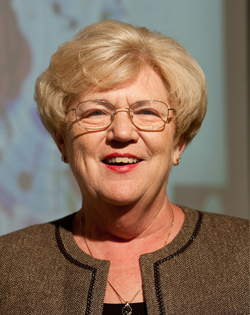 Dr. Swanson is an active researcher in Music-Curriculum-Instruction-Assessment for All Learners with numerous publications and presentations at the International, National, State, Regional and Local Levels. International presentations and trainings have been conducted in Brussels, Belgium; Hong Kong, Bologna, Italy; Kecskemet, Hungary and Taipei, Taiwan.  From 2012-2014, she served as a writer on the National Core Arts Standards and chaired the development of the Middle School portion of the National Core Music Standards.  In 2016, Swanson authored Evidence-based Practices for Music Instruction and Assessment for P-12 Students with Autism Spectrum Disorder and co-authored with Philip Shepherd, The Past, Present and Future of Kentucky Policies and Practices for Assessment in Music Education with publications pending in The Oxford Handbook of Assessment Policy & Practice in Music Education, Oxford University Press, New York.  She has music assessment research studies published by GIA and has authored and served on numerous Kentucky Department of Education's (KDE) Arts and Humanities committees since 1990.  In addition to publications, Dr. Swanson has conducted music education trainings throughout the nation and extensively across Kentucky.

Swanson has served as President of the Kentucky Music Educators Association (KMEA), Kentucky Alliance for Arts Education (KAAE) and VSA Kentucky. These state level leadership positions have resulted in service to the music education profession at the national and international levels.

In 2011, she was named a Western Kentucky University Distinguished Professor, a program designed to recognize faculty members who have served the University with distinction and have compiled an outstanding record of achievement in teaching, research, and service.

She is a member of numerous WKU university, college and department committees. Honors and Awards include:

2008:  KMEA College/University Teacher of the Year

2005:  Empire Who’s Who Registry of Executives and Professionals

2005:   Kentucky Music Education Association (KMEA) Distinguished Leadership/Service Award: State-level award for the teaching and advancement of music education across the Commonwealth and nation. (Highest award, presented only upon meritorious achievement in music education.)

2001:  KMEA Citation for Service: State-level award for the advancement of music teaching across the Commonwealth.

1998:  Recognized by President Bill Clinton at the National Awards in the Arts ceremony at the White House, Washington, DC  for outstanding  contributions to Kentucky Arts Education (November)