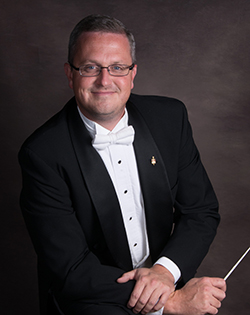 Matthew McCurry currently serves as the Associate Director of Bands and Director of Athletic Bands at Western Kentucky University where his responsibilities include teaching courses in music education as well as conducting the Spring Symphonic Band and overseeing the athletic band program, including the Big Red Marching Band - The Pride of the Hilltoppers and the Spirit Pep Bands.

Dr. McCurry was most recently Assistant Director of Bands at West Virginia University, where he spent four years working with the concert and athletic bands.  Before moving to WVU in 2016, Dr. McCurry spent fifteen years as an educator in the public schools of East Tennessee, where he spent twelve years as the Director of Bands at Knoxville’s Carter High School.  During his time there, the band grew to become the largest comprehensive band program in the county with over 200 students in two marching bands, three concert ensembles, and  competitive jazz and indoor programs. The concert bands earned consistent Superior ratings in Concert Assessment Performances while the marching band was named a Top 10 Finalist Band in the State Marching Band Championships on a regular basis.  Additionally, Dr. McCurry often appears as a guest clinician for local and regional honor bands and summer clinics.