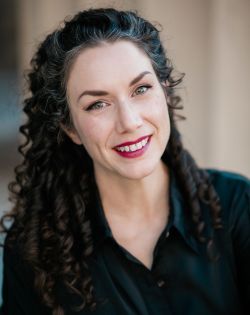 Liza Forrester Kelly is an active performing artist, stage director, and music educator.  As a recitalist, she tours programs that range in repertoire from early music, to classical and contemporary art song, to jazz, musical theater, and pop song.  Notable recital engagements include those with the New York Festival of Song, New York City Opera, Joy in Singing, Caramoor Center for Music and the Arts, the Five Burroughs Music Festival, the Pittsburgh Song Collaborative, the Cincinnati Song Initiative, and the Goldsboro Music Festival.  Stage credits include roles and engagements with Cincinnati Opera, Glimmerglass Opera, New York City Opera, Cincinnati Symphony Orchestra, Cincinnati May Festival, the Dayton Bach Society, and the Western Kentucky Symphony.

As an educator, she is passionate about working with young vocalists in building the skills and artistry necessary for traditional and non-traditional vocal performance.  She conducts recital and performance workshops at universities, colleges, and performing arts high schools across the United States.  Recent credits include Carnegie Mellon University, Miami of Ohio, Butler University, Marion University, the Youth Performing Arts School of Louisville, KY and the Governor’s School for the Arts (KY).

Now in its second year, she has also founded the Western Kentucky University Opera Outreach Program.  This ensemble tours south central Kentucky to educate elementary through high school aged students on opera and its composers through hands-on, interactive workshops and performances.  Workshops designed by Liza for the Outreach Program include Mozart! and FrankenOpera.

Collaborating with colleagues in the fields of music, dance, visual art, and spoken word, Liza has curated, directed, and produced a number of performance art installations.  Recent premiers include, Beyond Good and Evil, Residual Unseen: reverence for lost voices, and Damned Divas! Opera’s Homicide Habit.  These non-traditional performance events blur the lines between audience and ensemble relationships and aim to raise questions or provoke dialog concerning socio-political and cultural issues.

She is an alumna of the Glimmerglass Opera Young Artist Program, the Ravinia Steans Institute, and the Carnegie Hall Weill Institute.  She received her Masters of Music and Doctorate of Musical Arts from the University of Cincinnati College-Conservatory of Music.  She has worked as faculty for the Center for Language in Song and as assistant artistic director the Accademia Vocale Lorenzo Malfatti in Lucca, Italy.  She is currently an associate professor of music and director of opera theater at Western Kentucky University and serves as stage director for the Schmidt Vocal Institute.