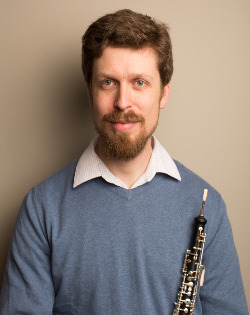 Keith W. Sorrels is a creative and in demand performer and teacher.  Originally from Munster, Indiana, Keith now lives and works in Nashville, Tennessee, USA.  Since 2014, he is Adjunct Professor of Oboe, Music Theory and Music Appreciation at Western Kentucky University and an active freelancer.

Keith began playing the oboe at age ten and soon after began studying with Amy Barwan.  He credits her with sparking a lifelong appreciation of music, the oboe, and teaching.  Keith went on to earn a Bachelor of Music degree from Indiana State University in 2005.  His undergraduate teacher, William Denton, nurtured his curiosity and appreciation of musicianship.  Keith was recognized for his scholarship and musicianship, earning multiple scholarships, a composition prize, the concerto competition, and was inducted into Pi Kappa Lambda (national music honor society) in 2004.

Graduate studies were completed at the Jacobs School of Music at Indiana University.  Keith earned Master of Music (2008), the Performer Diploma (2009), and Doctor of Music (2018) degrees.  His principal oboe teachers were Linda Strommen, Roger Roe, Washington McClain, and Daniel Stolper.  In addition to formative oboe studies, Keith also chose coursework concentrations in philosophy of music education, music theory, and early music performance practice.  During PD and DM residencies, Keith worked closely with Professors Strommen and Roe as Associate Instructor of Oboe.  Among others, Keith developed a keen interest in the oboe repertoire of English composers.  His doctoral research, “Thematic Continuity and Melodic Recycling in Herbert Howells’s ‘Sonata for Oboe and Piano’ (1942)” is a historical, theoretical, and performative exploration of Howells’s only chamber work for the oboe.  Keith has most recently studied privately with Titus Underwood, Principal Oboe of the Nashville Symphony.

It was in graduate school that Keith began seriously pursuing machining and metalworking.  He’s always had an interest in mechanical things - fixing, building, and creating.  This naturally lead him to pursue a deeper understanding of how the oboe works.  From 2014-2018, Keith worked at Onks Woodwind Specialists in Smyrna, Tennessee repairing and restoring all makes and models of oboe family instruments.  He has since become an independent provider of repair services and tools from his home machine shop.

Keith maintains a private studio of oboe and reed making students from his home northwest of Nashville in Cedar Hill, Tennessee.  In addition to teaching, he is a regular guest musician of orchestras and universities in Tennessee, Kentucky, and Indiana including the Nashville Symphony, Chattanooga Symphony Orchestra, and Orchestra Kentucky of Bowling Green among others.

See what Keith is up to or listen to recent recordings on his mostly oboe-related Instagram @keithoboe or visit his website www.keithoboe.com.