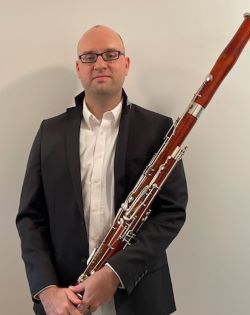 Mr. Keegan Finkbine received a Bachelor's in Music Education from Northern Kentucky University in 2010 where he studied bassoon with Mr. Russell Hinkle and conducting with Dr. Brant Karrick.  Mr. Finkbine earned a Master's in Bassoon Performance from the University of Georgia at Athens in 2014 where he studied with Dr. Amy Pollard.