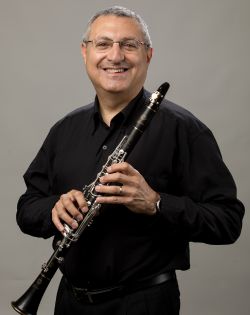 John Cipolla was elected and served for eight years on the International Clarinet Association Board of Directors in the leadership positions of president and secretary. He has held leadership positions with a variety of other professional organizations and strives to balance these leadership positions with a performing and teaching career. Of his teaching, a former student said, “Dr. Cipolla is very good about leading me out of my comfort zone and pushing me to transcend the limits I place on myself.” John is currently Professor of Music at Western Kentucky University (USA). He has been awarded the University of North Carolina at Greensboro’s Distinguished Alumni award, the Kentucky Music Educator’s “Teacher of the Year” District Three award three times and the state award once. John created a play-along instructional recording of much of the Carl Baermann Method for Clarinet, published on Music Minus One records. He is regularly invited to serve on juries for competitions, internationally and in the US. He has performed solo and chamber music recitals throughout the United States of America, Europe and South America. He has recorded on Sony, ECM New Series, Centaur, Nonesuch, Dance Vision Records, NBC television, and numerous radio broadcasts and has released three solo recordings. John has also had a varied career as a multiple woodwind player (clarinets, saxophones, flute, piccolo) in New York City prior to teaching full time. While in NYC, he performed and/or recorded with an eclectic array of artists and ensembles including The New York City Opera, St. Luke’s Chamber Orchestra, Meredith Monk, Aretha Franklin, Liberace, Johnny Mathis, Dizzy Gillespie, Mario Bauza’s Latin Jazz Ensemble, as well as being a tenured member of the Radio City Music Hall Orchestra and one of the longest running Broadway shows, CATS. John currently focuses his professional energies on teaching, recording contemporary solo and chamber clarinet music, and commissioning clarinet quartet music for The International Clarinet Quartet–a quartet he co-founded with clarinetist/composer, Osvaldo Listen (Argentina), clarinetist/bass clarinetist, Sauro Berti and clarinetist, Piero Vincenti (Italy). Their recent recording, Ritmo Nuovo is available through CDBaby.com. He is a Selmer Paris, Gonzalez Reed and Silverstein Works clarinet artist. John was a scholarship student of Joe Allard at The Juilliard School in New York City. He holds the Bachelor of Music in saxophone performance from The Eastman School of Music, studying with William Osseck, the Master of Music degree in clarinet performance from Mason Gross School of the Arts at Rutgers University, studying with Dr. George Jones, and the Doctor of Musical Arts degree in clarinet performance from The University of North Carolina at Greensboro, studying with Dr. Kelly Burke.