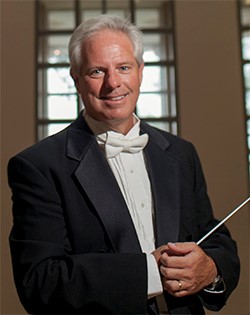 Dr. Gary Schallert is Director of Bands and Professor of Music at Western Kentucky University where he administrates the band program, conducts the Wind Ensemble and Symphonic Band, and teaches graduate and undergraduate courses in conducting and music education. Additionally, he supervises instrumental student teachers.

Dr. Schallert earned his Bachelor of Music Education and Master of Music degrees from New Mexico State University, and the Doctor of Arts degree in Wind Conducting from the University of Northern Colorado. Schallert maintains an active schedule as a guest conductor and clinician throughout the United States and has conducted touring ensembles in Europe, Australia, and Costa Rica. Under his leadership, the WKU Wind Ensemble performed at the 2012 and 2016 KMEA Conferences and the 2016 CBDNA Southern Division Conference in Charleston, SC.  In addition to his work on the concert stage, Dr. Schallert is an active adjudicator for prestigious marching arts events across the county including Drum Corps International. He has contributed Teacher Resources Guides for nine volumes of the popular series Teaching Music Through Performance in Band.

Dr. Schallert is a member of the Kentucky Music Educators Association and was recently honored with the 2017 College/University Teacher of the Year Award.  Other professional affiliations include the College Band Director's National Association, the National Association for Music Education, the National Band Association, and the KMEA Third District Band Director Association. He is a member of Phi Beta Mu, Phi Mu Alpha, and is an honorary member of Kappa Kappa Psi and Tau Beta Sigma. He and his wife, Amy, reside in Bowling Green and have four sons; Ryan, Casey, Evan and Trevor.