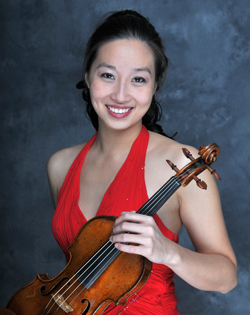 Violinist Ching-Yi Lin’s recent performances and masterclasses have taken her to the Barratt Due Institute of Music in Norway, the Shenyang and Xi’an Conservatories in China, Northwestern University, Louisiana State University, and the University of British Columbia. She’s also performed in New York on the Museum of Modern Art’s Summer Garden Series, at Sejong Center in South Korea, and in Taiwan at the National Concert Hall in Taipei.

A dedicated and creative teacher, Ching-Yi Lin is an Associate Professor at Western Kentucky University (WKU) and the Director of the WKU Pre-College Strings Program. Lin also serves on the faculty at the Indiana University Summer String Academy and the WKU Summer String Institute. Previously, she served on the faculty of the Sommersymfoni i Kristiansand in Norway.

As a board member for the Daraja Music Initiative, a non-profit organization in Moshi, Tanzania, Ching-Yi founded a beginning strings program for students of the Majengo Primary School in 2016. Over 60 string instruments were donated from across the United States for this endeavor. The program offers college music majors an international opportunity to teach, inspire, and make an impact in a global classroom setting.

In 2013, Ms. Lin was presented with the prestigious Jefferson Award for Public Service in Washington, DC, recognizing her work in bringing music into the lives of young people throughout her community. And in 2017, Ching-Yi received a Sisterhood grant from Western Kentucky University to direct student teachers and volunteers in teaching the violin to refugee children in Bowling Green, KY. In 2020, this program developed into a non-profit organization called Bridging Cultures with Music.