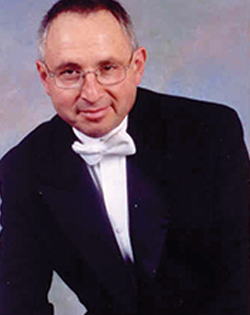 Dr. William Scott came to Western Kentucky University as the Baker Professor of Music in 2003. He has been noted for his work in orchestral development in both the public school and professional sectors.

During his 22-year tenure as Orchestra Coordinator for Spartanburg, South Carolina School District No. 7, the orchestra program became one of the most prestigious in the Nation. Under his direction, the Spartanburg High School Symphony performed for former President George Bush, former Prime Minister Margaret Thatcher, and General Norman Schwarzkopf. He initiated and conducted opera programs in the public schools in cooperation with the University of South Carolina Opera Theater. As the administrator and conductor of seven international concert tours, he has conducted concerts in Australia, New Zealand, England, Scotland, France, Germany, Austria, Switzerland, Holland, Hungary, Poland, and the Czech Republic.

Dr. Scott has served the past eight seasons as Music Director and Conductor of the Greater Spartanburg Philharmonic. Under his leadership the orchestra transitioned from all volunteer to the fully professional Greater Spartanburg Philharmonic. In 1997, they were the featured orchestra on national television for Kathy Lee Gifford's "We Need A Little Christmas." Masterworks concerts, under Scott's direction, have included such internationally known artists as Mark O'Connor, Chick Corea, Sharon Isbin, and Jon Nakamatsu and have been featured on NPR's Carolina Concerts.

His book, A Conductor's Repertory of Chamber Music, was published as a reference book by Greenwood Press in 1993.