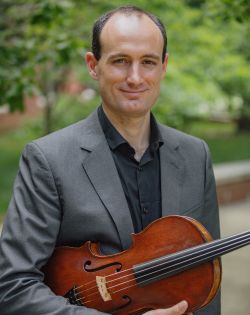 Violist Andrew Braddock’s teaching and performing career has recently taken him to the Sejong Center in Seoul, South Korea, the National Concert Hall in Taipei, Taiwan, and the International Viola Congress in Rotterdam.

A passionate educator, he has given masterclasses at Vanderbilt University, the Chinese Culture University in Taipei, Taiwan, the University of Oklahoma, and many others. He is currently on the faculty of Western Kentucky University (WKU) and the WKU Pre-College Strings Program. In the summers, he teaches at the Indiana University Summer String Academy and directs the WKU Summer String Institute, an intensive summer camp for students ages 4 to 18 based around chamber music and orchestral performance. His creative teaching includes his work with the Daraja Music Initiative in Moshi, Tanzania, the Bridging Cultures Through Music project, and various outreach programs in his community.

From 2017 to 2021, Dr. Braddock was the editor of the Journal of the American Viola Society, the most prominent peer-reviewed publication for viola scholarship. With its three issues per year, the journal presents musicological and music theory research relating to the viola, in addition to pedagogical insights and current reviews. Most recently, Dr. Braddock spearheaded an issue devoted to the 40th anniversary of George Rochberg’s viola sonata, examining it from various musicological, historical, and theoretical perspectives. He previously served as the journal’s New Music Editor and on the board of the American Viola Society.

He is the principal violist of the Paducah Symphony Orchestra, and he regularly plays with the Nashville Symphony and the Nashville Opera. He holds degrees from Indiana University, Vanderbilt University, and the University of Kentucky. His principal teachers are Atar Arad, Kathryn Plummer, and John Graham.

Visit his personal website for his recordings, writings, and arrangements for viola: andybraddock.com