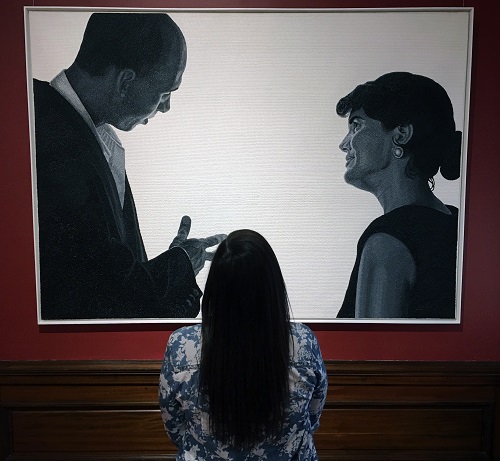 Arte Cubano, an exhibition celebrating Cuban contemporary art and diversity, is now on view at the Kentucky Museum as part of WKU’s International Year of Cuba.

This exhibition highlights a universally agreed-upon characteristic of the island's art: an incredible diversity. Cuban art is so rich in large part because of its diverse cultural blend of African, European, and Latin/Caribbean influences. Add to these traditional roots the revolution of 1959, and Cuban art occupies a unique aesthetic place in the contemporary art world.

Building on changing relationships between the governments of the United States and Cuba, Arte Cubano reflects more than 25 Cuban artists’ ruminations on the quotidian, social, and political realities of the island and the contemporary world. The island geography and political intensity of Cuba inform the work in a way that is immediately identifiable, often concealing coded, even subversive, ideas while simultaneously celebrating the richness of Cuba’s cultural identity. Peeling away the layers of Cuban art often reveals a story of struggle caused by economic and political consequences, and the social upheaval that a true revolution produces.

Spanning several generations, these contemporary Cuban artists come from an unusual place: a country often isolated because of its socialist revolution. All of the artists in this collection grew up in socialist Cuba, and many graduated from the prestigious Instituto Superior de Arte—built at the beginning of the revolution, Havana’s equally excellent San Alejandro Art Academy, or the Escuela Nacional de Arte. Others graduated from local art schools. Despite their disparate backgrounds, aesthetic sensibilities, subject matter, materials, and styles, there is something uniquely Cuban about the art in this collection.

Support for this exhibition is provided by WKU’s Office of International Programs, WKU Potter College of Arts & Letters, and WKU Cultural Enhancement Series as part of International Year of Cuba. Mid-America Arts Alliance and ExhibitsUSA co-organized Arte Cubano with the Center for Cuban Studies (NYC) to synthesize two extraordinary private collections generously made available for the project. This exhibition could not have been made possible without their collecting vision and loan generosity. The Center for Cuban Studies opened in 1972 and was organized by a group of scholars, writers, artists, and other professionals, in response to the effects of US policy toward Cuba.

About International Year of…

The International Year of… Program is intended to provide the WKU campus and community with a rich, complex sense of place and interconnectedness through a year-long celebration of a single country. The 2018-19 IYO Cuba so far includes over thirty events and nearly fifty academic courses that include Cuban content to help students learn about Cuba in a discipline-specific way that is relevant to their chosen field of study.