Masks must be worn inside inside of all university buildings regardless of COVID vaccination status. 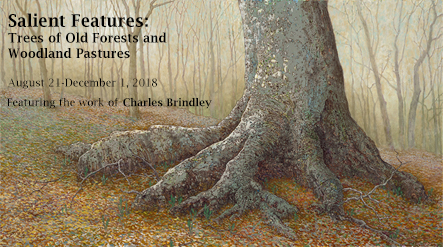 Bowling Green, KY:  The Kentucky Museum is pleased to host Salient Features: Trees of Old Forests and Woodland Pastures from August 21-December 1, 2018. This special exhibit celebrates the work of Kentucky-based artist Charles Brindley and is a time-honored tribute to the living world around us.

“Charles Brindley’s work remains primarily focused on his home area, the natural karstland between the Nashville Basin and Kentucky’s Bluegrass. Already well-known for his environmental and architectural renderings, this exhibit is the first to highlight his love of and fascination with the woodland pasture tree, an iconic symbol of the Upland South” shares Kentucky Museum Director Brent Bjorkman, “Charles’ focus on the region’s pasture trees is a testament to his evolving grand work, his dedication to detail, and the pride he feels--that many of us feel--being connected to the distinctive landscape of South-Central Kentucky.”

“I have always been drawn to the karst landscape” says Charles Brindley, “Those areas that are defined by rich top soil underlain by limestone that yield beautiful and dramatic characteristic land forms that include alluvial plains and fertile fields along rivers and streams, gentle declivities, fissures, caves, sinkholes and copses.” Brindley’s interest in woodland pasture trees began in earnest in the mid-1980s, when he started working directly on site, creating large scale drawings of these majestic wonders. Since then, the artist has produced over 500 tree drawings and paintings, many of which are featured in the exhibit which runs through December 1st. Charles Brindley is well-known for his artistic interpretations of such wonders as the Great Bur Oak of Pembroke, the Ancient Osage Orange of Harrodsburg, and one of the largest Sassafras trees in the world, located in Owensboro.  Tying in local campus culture the exhibit will also feature a “work-in-progress” by Brindley of a prized oak tree adjacent to Cherry Hall.

There will be a public opening for the Salient Features exhibit on Friday September 7th from 5-7 pm.  Please join us at the Kentucky Museum.

Join artists Alice Gatewood Waddell and Mike Nichols for a special look at the buon fresco mural process and commemoration of the Jonesville community. Timelapse videos, photographs from Jonesville, and the chance to Q&A with the artists.