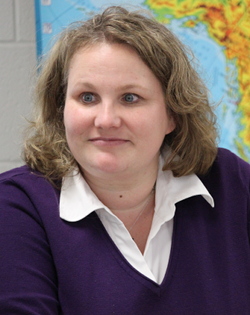 The back-to-Africa movement in a state and in a national context. Nationally, I examine the activities of the American Colonization Society in the aftermath of the Civil War, with a particular focus on the late nineteenth, early twentieth century. I am currently working on two related projects in this field: Colonization as a transnational alternative to the problems of Reconstruction and the role of women in the antebellum Kentucky colonization movement. In addition, I have a strong interest in women's and gender history and have worked extensively in these areas. I am also working on a study of a nineteenth-century Kentucky family dynamics using letters written in the 1840s between Joseph and Elizabeth Underwood. Once I have finished these projects I will be focusing my attention on Southern Women and Race at the Chicago World's Exhibition of 1893.

My love of history began when I met my childhood heroes Jo March, Laura Ingalls, and Anne Shirley. All of these girls were from another time and I became fascinated with what the world was like “back in the olden days” as my younger self described it. My love of discovering the world of yesteryear compelled me to major in history in university where I earned a Bachelor of Arts with Honors Standing at the University of Western Ontario. Since I believed that there was still more to learn about our historical narrative I continued my education completing a Master of Arts at Central Michigan University and eventually a Doctorate in History at the University of Kentucky. As an historian I am especially fascinated at how issues of race and gender have influenced our historical experiences and have long wanted to write women and people of color back into our history books. My current research deals with black and white Kentucky women in two separate contexts: colonization and manumission and Kentucky women and the Columbia World’s Exhibition of 1893. Both of these manuscripts will attempt to give Kentucky women a stronger presence and a louder voice in studies of Kentucky’s past.