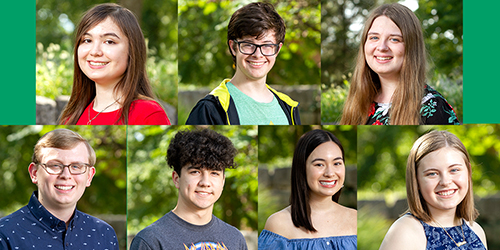 The 2020 candidates for the U.S. Presidential Scholar from The Gatton Academy are:

The White House Commission on Presidential Scholars’ review committee selects honored scholars annually based on their academic achievement, personal characteristics, leadership and service activities, in addition to the quality and content of their essays.

Each year, more than 4,500 candidates are identified for the component of the program that focuses on academic achievement and based on having scored exceptionally well on the SAT or the ACT.  Eligible students are U.S. citizens and legal permanent U.S. residents who will graduate or receive their high school diploma between January and August of the current program year and have taken the ACT or SAT assessment on or before October of the previous year.

“We are thrilled to have so many Gatton Academy students recognized by the U.S. Presidential Scholars program. These students are extraordinary in so many ways, well beyond their academic abilities. They are researchers, problem-solvers, musician, and dedicated community volunteers,” states Director of The Gatton Academy Dr. Lynette Breedlove.  “They truly representatives of Kentucky’s bright future.”